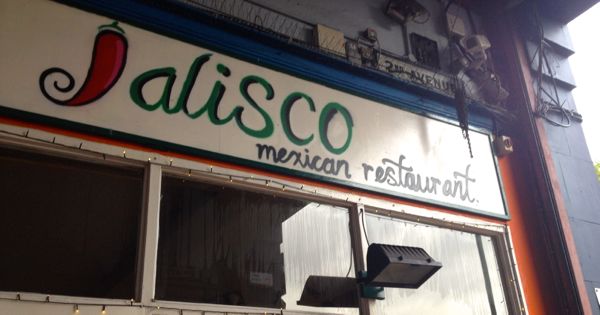 The sun beat down heavily on Brixton that Friday afternoon. The tropical fruits on Electric Avenue felt at home. The fish didn’t. Not a table to be found under the cover of Brixton Village, except for one two-seater in El Panzon. A miracle. I think we jumped the queue. The sauce on my burrito was hot that day too. I was out to impress so went for something higher on the scale than usual. A rookie error. Sweating from two types of heat impresses no-one. The beer was cold though and the service brisk. We were in, out, and back in a bar within twenty minutes.

How the seasons change a place. Five months later and the rain hasn’t stopped since 2014 began. Brixton Village eerily quiet and the choice of tables in the newly renamed Jalisco, ours. One by the radiator appealed, the thought of a cold beer didn’t – I had one anyway. I’d hoped that a Mexican resturant would inspire a feeling of warmth, but the door was open and aside from the waitress’s accent the Mexican atmosphere was lacking. No sombreros, not even El Jarabe Tapatio on the radio, and the basket of ponchos turned out to be boring blankets. I wasn’t out to impress this time; still, I’m not wearing a blanket while I eat a burrito – it’s just not in the spirit of the cuisine. The spice would warm me though, had I not remembered the last time and opted for ‘regular’ at the last minute. Now that’s a real rookie error. My burrito lacked any fire at all. Apparently ‘mild’ is for wimps, according to the menu – they need to extend this classification to ‘regular’ too. My choice, so of course, my fault.

Jalisco offer burritos, tacos, and quesadillas with your choice of meat – the classics of the Mexican offering, although in this case the choice of meats is probably twice as long as the other burrito vendors in London. Also, Jalisco does have a more ‘sit down and eat’ feel, rather than the fast food fragrance of the high street options. No bad thing, a burrito is meant to be eaten quickly; sometimes, it’s good to experience fast food at a slow pace though.

I couldn’t remember what I’d chosen in 2013, so for the fresh start of 2014 I opted for the panzon favourite: a large burrito with tomatoey ground beef, cooked with six types of pepper (six?! I was so impressed I wrote that fact down). This is a serious fill. Stuffed to the gills only describes half the feeling upon finishing – the plate of nachos beforehand didn’t help. But, it’s a good fill, a tasty fill, the smoky spiced beef mingling with all the additions of the burrito – cheese, beans, salsa, rice, guacamole, and cream – to create a homogeneous paste that coats the tongue with its delightful flavour. Every dribble down chin or finger you’ll lick clean, guaranteed. Not that someone as well trained in burritos as I am has this problem of course.

The bill came to £13 a head, which isn’t the cheapest eating in Brixton Village. The nachos and beer probably tipped us over the £10 mark. Choosing a drink here is like a game of Russian roulette: six on the menu, but one is always missing, according to the waitress. She could have told me that before I chose. My second choice was the typically watery – a persistent quality in South and Central American beer it would seem – Mexicali Beer. The hint of lime matched the dinner, the watery nature and the lack of flavour didn’t match the weather. For that, the deep fruity flavour of a Reliance Pale Ale from Brixton Brewery, served from Craft Beer Co afterwards, was far better suited.

With so many venues in Brixton Village, the temptation to play Pokemon and try and eat them all is strong. I doubt there’s a Brixton resident who has achieved such a juvenile feat, but if there is, a name change alone doesn’t qualify Jalisco as a new species to collect. The menu, decor, and drinks seem identical, and with the neighbouring competition strong those not playing the game and without a craving for the isthmus will probably be swayed in a different direction. Having said that, if you want a filling taste of Mexico, Jalisco is the closest you’ll get south of Soho.

Nik Speller blogs at conradsbeer.blogspot.co.uk and can be found on Twitter @NikSpeller

Beef it up: Meat Liquor