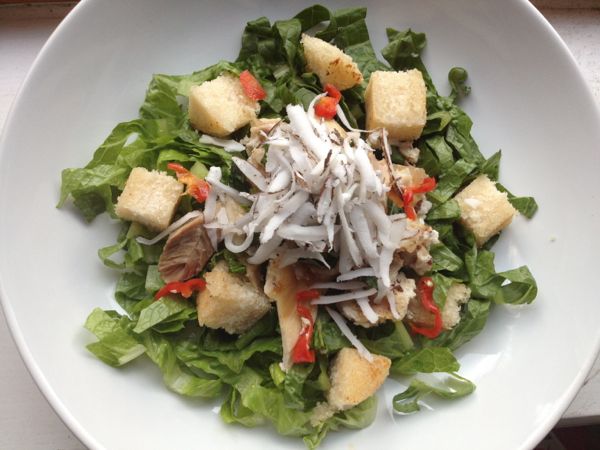 When the weather warms up, salad becomes your new best friend. Quick and easy, it can be a great way to try out new things or reinvent old favourites. A recent trip to the Nour Cash and Carry saw me impulse purchase a coconut and a packet of bammy. This traditional Jamaican delicacy is made from ground cassava. It was the staple carbohydrate before the Second World War when wheat based breads became cheaper and easier to bake commercially. Wheat and gluten free, it is soaked before being fried or toasted and I just knew it would make great croutons for the salad.

Cracking open a coconut is easier than you’d think, especially if you’re letting off steam. Pierce the softest of the three ‘eyes’ with a screwdriver and drain out the water inside (this is the stuff that has become very fashionable recently rather than the milk). Then place the coconut on the floor and hit with a hammer. It should crack open easily. Tap again and the flesh will come away from the shell neatly. I don’t bother removing the brown skin before eating.

I then poached the chicken in coconut milk for the juiciest meat possible before dressing crisp crunchy lettuce with lime juice and fish sauce and adding a scattering of chilli to accompany the grated fresh coconut and bammy for a salad that’s packed with flavour and something new for summer.

While the chicken is cooking, mix the reserved coconut milk with two tablespoons of water and pour over the bammy to soak for 5-10 minutes. Open the fresh coconut and grate on the largest hole of a box grater and set aside. Finely shred your lettuce. Chop the chilli and reserve. Make your dressing by mixing the lime juice, sugar and fish sauce in a jar.

Cook the soaked bammy by grilling on the hottest heat for 5 minutes each side or frying in oil until golden brown and crisp around the edges on either side. Cut into cubes and begin building your salad by dressing the lettuce. Place the bammy on top and then take the chicken off the bone and shred before adding it. Top with the grated coconut and chilli and serve.