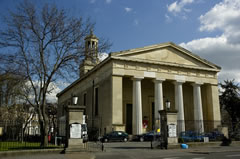 Castanets at the ready. Tonight sees the opening fiesta of a new bar and restaurant in the crypt of Windrush Square’s St Matthews Church.

Gremio de Brixton, a Spanish-themed bar featuring traditional tapas and drinks, is the product of a partnership between Gremio (of Tooting’s Graveney and Meadow) and Antic pubs, the team behind local bars Dogstar Brixton and Effra Social. Gremio de Brixton opens hot on the heels of Effra Social, less than 4 weeks after the Social’s February launch.

All comers are invited to enjoy the food, drink and ambiance on offer at Gremio’s opening party, which runs from 6pm til late. The venue, formerly the Babalou nightclub, has been fully renovated with organisers making grand plans for the new bar and restaurant. Gremio will soon feature a variety of entertainment including dancing, musical and sporting events, with organisers hoping to attract Brixton’s Spanish community in addition to a wider crowd. The aim is to offer locals ‘the taste of Spain in the heart of Brixton’.

Does sangria in central sound tempting? Will you be saying ‘Hola’ to the new bar? Let us know what you think!