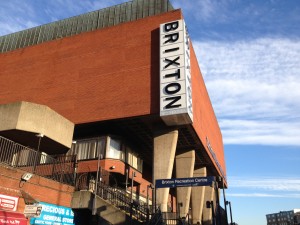 People who swim, play football, lift weights, celebrate their birthdays, learn basketball, teach basketball and more at the Brixton Recreation Centre packed out a meeting with the council tonight and won a promise that centre will be kept open.

After angry interjections from the public, arguments and passionate speeches, leader of the council Cllr Lib Peck was forced to promise that: “the strength of feeling in the room means there is too much [feeling] to really ever get the space to think about closing the Rec. I am now going to say categorically we will keep the Rec.” She had originally said earlier in the meeting that it would be put to consultation and the “decision will have to be made by residents.”

In a draft planning document drawn up by Lambeth council planners and to be put out for consultation, it had been suggested in September that the Rec be sold and a replacement site found for Brixton leisure facilities, or that the Rec be radically refurbished.

The planning document was due to be put to consultation with the public in February. Cllr Peck was keen to emphasise that “there was not ever any intention not to consult”, but she apologised for not holding a meeting directly with Brixton Rec users when the ideas were drafted in the summer.

With about 100 people in attendance, locals reacted angrily to the idea of closing the Rec at the meeting tonight. One woman said: “this building is not ‘iconic’ or ’emotional’; it’s a lifeline for people that keeps people off the street”. Cllr Peck and others at the table were repeatedly interrupted with calls such as “cut to the chase” and “we are Brixton; without the Rec we are nothing.”

Steadman Scott, football coach at the Rec, emphasised the important role sport plays in the Brixton community especially for young people: “What you [the council] should be doing in this place is highlighting the good things, the successful kids…I put back into the community. To see this building knocked down, I will uprise.”

The many different uses of the Recreation Centre, from basketball training to wedding receptions and childrens’ birthday parties were also a key factor in people’s strength of feeling for the Rec as a positive community “hub”.

Jimmy Rogers from the Brixton Topcats, whose basketball club has been training at the Rec since it opened, called the council’s consultation over the summer an “insult”: “If you talk about consultation, make it real.” He said it was a “scandal that Brixton cannot name one famous athlete from Brixton”, calling for a proper sports policy for Brixton.

As well as promising to keep the Rec open, Cllr Peck gave a commitment to trying to make that permanently written into the plans for the future of Brixton. She had been questioned on how she could ensure the decision cannot be easily overturned by subsequent administrations.

Many at the meeting were in favour of improvements to the building and it is likely that the Recreation Centre will undergo a refurbishment to improve accessiblity as well as energy efficiency. Lib Peck told the group: “Does the building have to come down in order to remedy that? No, not at all. Some of the measures that need to be put in place could cost around the £10 million mark, so it’s a serious level of investment. We would be keen to work with you on how we can do that”.

There are currently no detailed plans on how the Rec would be refurbished and the process of consultation will continue in 2013.

Brixton Topcats: slip to eighth place in the EBL league