Another week at South London’s best cinema. This week, some actual news!

The big news this week is that the Picturehouse chain of 21 cinemas (of which the Ritzy is a key member) has been acquired by multiplex behemoth Cineworld for the princely sum of  £47m. The story broke this morning, and has provoked a mixed reaction across social networks, from despondent to cautiously optimistic and even, in some cases, highly positive.

Though time will tell as to how the deal pans out, the message coming from the top is loud and clear: expect business as usual. Here’s an official statement from Picturehouse MD Lyn Goleby: “The Picturehouse cinemas, and all that we stand for, will remain as before and will operate as a standalone division of Cineworld. Everyone recognises that the success of this change depends on the unique nature of the Picturehouse Cinemas being protected; the programming policy will not change, the membership schemes will remain in place and the independent identity of the cinemas will be protected.” So that, as they say, is that.

Back onto more regular territory now, with a look at the new releases hitting the Ritzy this week. Martin McDonagh’s Seven Psychopaths is a slick, chatty thriller revolving around the inability of an alcoholic screenwriter (Colin Farrell) to finish his script about the titular lunatics. It’s sparky and sometimes funny, but one’s enjoyment of it will hinge upon a tolerance for relentless oh-so-po-mo auto-quotation, sub-Tarantino cleverness, and the genuinely appalling treatment of its female characters (made no more palatable by the script’s explicit reference to such deficiencies). The performances from a large cast lift it; an unhinged Sam Rockwell and Christopher Walken as a suave dog-kidnapper (!) are both especially noteworthy. It’s being supported by a pair of late screenings of its far superior predecessor In Bruges, which possesses an emotional wallop that’s sorely lacking from McDonagh’s new effort.

Also out this week is Dickens adaptation Great Expectations, directed by Mike Newell, and starring Helena Bonham Carter as Miss Havisham and him from out of War Horse as Pip. It’s hardly essential viewing, but decently done. Another newie gets a one-off screening as part of the Picturehouses’ ongoing Discover Tuesdays strand: Giorgos Lanthimos’ bizarre  and haunting Greek drama Alps, about which it would be wrong to give too much away. There’s also a documentary about a depressed ballroom dancer called Ballroom Dancer on. I haven’t seen it, but it might well be worth a foxtrot (or insert your own pun which actually makes sense). 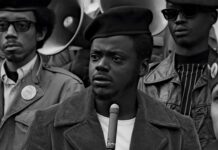