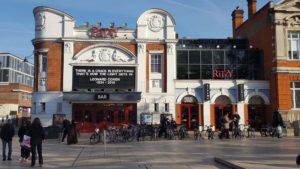 Local management of the Ritzy cinema in Brixton has launched a drive to recruit weekend staff who live in the area.

He said the move was not a bid to recruit people to counter the effects of strike action by full-time Ritzy workers, whose campaign for the London Living Wage of £9.75 an hour has been joined by two other cinemas in the Picturehouse chain that owns the Ritzy.

The new jobs would be fixed-hours weekend contracts, he said and he had consulted the Ritzy staff reps for before advertising them.

Pay for the weekend jobs will be determined by the current Ritzy terms and conditions of £8.10 per hour for a three-month probation period rising to £9.10 an hour.

The Ritzy branch of the entertainment union Bectu welcomed the drive for further diversity at the cinema, which, it said,  was “something we’ve worked together on with the general manager of the Ritzy”.

Branch secretary Nia Hughes said: “We hope this further highlights the importance of Bectu at the cinema, and encourages new members of staff to learn of the rich history of the union they can join, especially in terms of our high profile 2014 campaign for the London Living Wage.”

The 2014 campaign means that new recruits will earn £9.10 an hour after their probation period and have the same terms and conditions as existing staff. These were elements of the role at the Ritzy which other Picturehouse staff did not receive, said Hughes.

Anyone interested in the jobs should send their CV to james.v@picturehouses.co.uk.

A journey down the A23 and into film production

Brixton’s Ritzy among hundreds of cinemas to suspend operations