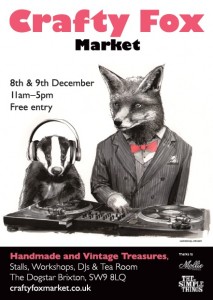 Walking from my house to Brixton tube I saw three Santas, two carol signers and an elf last Saturday. And taking a look at what’s going on in Brixton this weekend that may have been the tip of the iceberg. Christmas refuseniks are probably best just staying at home with a jar of bah humbug.

‘Tis the weekend to get going on the Christmas shopping and pick up some unique and eclectic pressies at the Crafty Fox Market, taking over Dogstar in the daytimes. Full of exactly the sort of thing you wish you could buy when you’re frantically rummaging in Accessorise on Christmas eve, it’s taking place on Saturday and Sunday, from 11am to 5pm. Look out for whimsical woodcut jewellery from Manolo, brilliant prints and cards from Brixton-based designer Lucy Loves This (now sold in Liberty’s, no less) and lovely author and crafter Perri Lewis, who is co-curating the event AND holding craft workshops.

And then take a wintery walk up the hill in Brockwell Park, where there’ll be another Christmas Fair taking place in Brockwell Hall on Sunday 11am – 3pm. Santa’s going, and he’s pretty swamped at work at the moment, so no excuses.

Feeling so Christmassy that you could burst in a shower of glitter, baubles and M&S gift sets? Well, so is the Windmill by the look of it. On Friday it’s the Murmur Box Xmas Party. Christmas jumpers are strongly encouraged, and there’s a promise of cake to much on while you listen to the mix of pop, psych, soul and folk. A fiver on the door. Then on Sunday it’s the turn of somewhat-more-esosteric The Hearty Pre-Christmas Arty Party featuring, and I can only quote, ‘a night of vocal gymnastics, Shakespeare sung (backwards), gothic colourama, Bollywood and a harp.’

Even if you don’t buy the whole manger/shepherds/little donkey thing, or object to the season’s rank consumerism, you have to admit that Winter Fest can be good for getting people together. A number of community groups are putting on neighbourhood parties, including a group from the streets round the Effra pub on Sunday at the Brixton Community base on Talma Road.

0
Lambeth council, local businesses, community groups, and charities and have stepped in to ensure that local children...