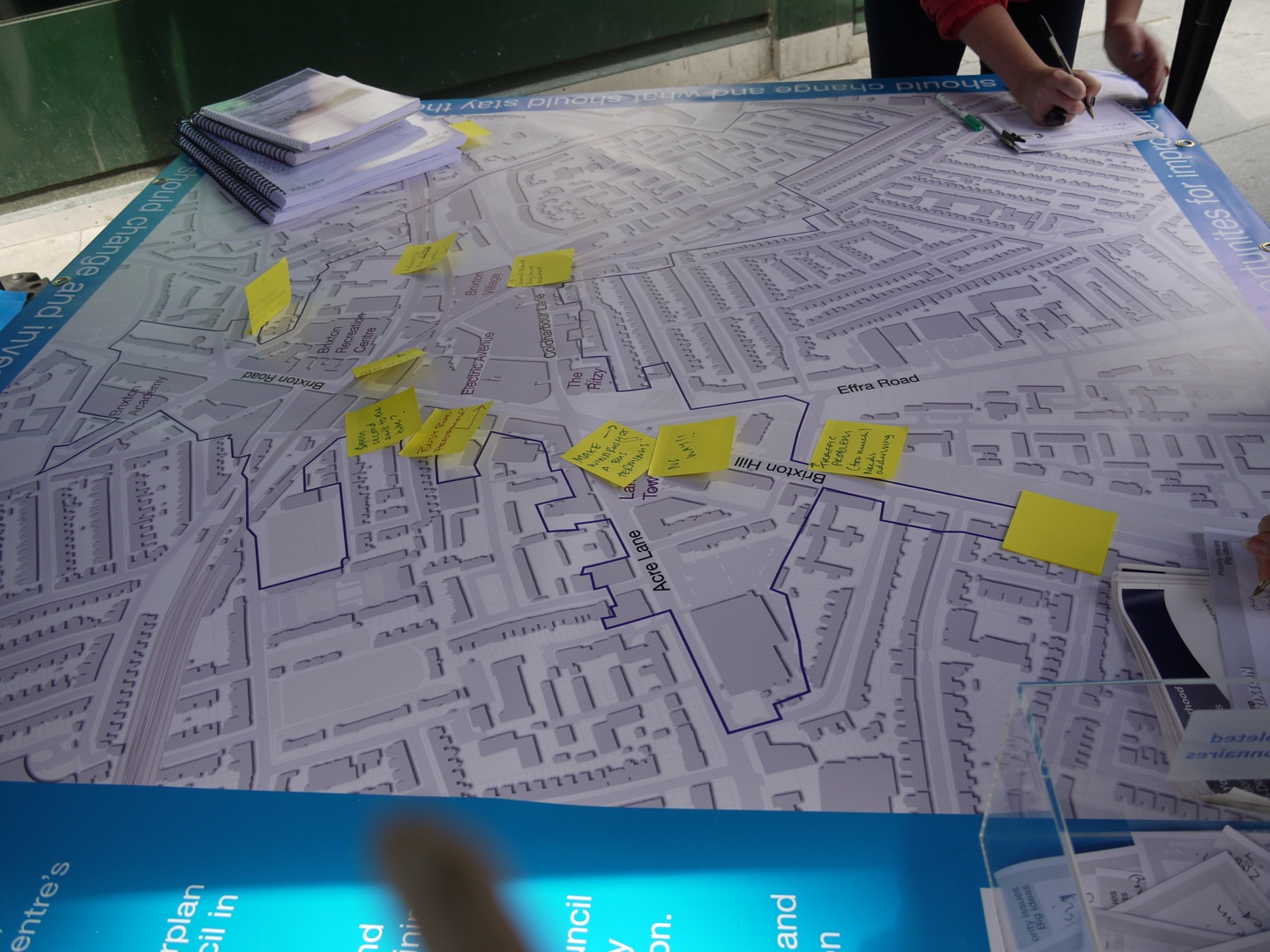 Lambeth has been a ‘co-operative council’ since January 2011. But, eighteen months later and after much hype, it doesn’t feel like we’ve got very far. How many of you have been given “more involvement and control of the services” you use with “council resources in your hands”?  I certainly haven’t. The latest consultation on Future Brixton is a prime example of a project sold to us as ‘co-operative’, but on closer look seems to be nothing much different old Lambeth.

In our interview with Cllr Lib Peck this month, she explained that the council has launched an extra period of consultation on the ‘Supplementary Planning Document’, the plan for the future development of Brixton town centre, in addition to a statutory period of consultation in the autumn.  This, she claimed was the ‘cooperative’ part of the process.

But is this really ‘cooperative’ in the true sense of the word? To me, it seems more like just a plain old consultation with a little bit extra added – stalls where residents are asked to write their ideas on little bits of paper and stick them on boards.

As a resident, I don’t really feel I have a chance for proper input. The workshops seem to be the best forum for getting your ideas heard, and yet they are ‘invite-only’, aimed at ‘key stakeholders’ and apparently not well publicised to the wider public. Am I not a key stakeholder, despite having lived in the area for over 26 years?

When we questioned her further, Lib Peck insisted she sees this process as something called ‘co-production’. Co-production is a fundamental tenet of Lambeth’s idea of cooperative council. In this model, real leadership and responsibility needs to be devolved to ‘users’. Public services are meant to be facilitators not just providers. As the think tank New Economics Foundation defines it: “this is not about consultation or participation – except in the broadest sense. The point is not to consult more or involve people more in decisions; it is to encourage them to use the human skills and experience they have to help deliver public or voluntary services.” That seems to directly contradict Cllr Peck’s assertion that the SPD ‘consultation’ is ‘co-production’, then.

If that’s the case, then Lambeth need to think a lot more creatively about how the council lives out cooperative ideals in practise.  They have started up a cooperative youth service, Young Lambeth, which fits much better with this model. But the cooperative approach needs to be holistic if we are to believe this really is a ‘co-op council’.

The mechanisms for co-production on all future developments in Brixton need to be written into the  SPD, rather than just into wooly promises. Lambeth Council needs to carefully think through just how each new development – such as ideas like refurbishing the Recreation Centre – can be ‘co-produced’ by the people. A simple consultation won’t be enough.

One start might be the website. At the moment, information on Future Brixton is compiled on Lambeth’s dire main website, designed to induce boredom in even the most fervent community activist. Until a few weeks ago, it wasn’t even being updated regularly. They should be making noise about the SPD consultation, creating a webpage that anybody can contribute ideas to – setting up a facebook page would be a start. Then, crucially, they need to listen to the ideas they receive and involve people who come forward.

Fundamentally, grand plans for true cooperative thinking in Lambeth are brought right down to earth by the lack of money available to the council and by the sheer challenge of trying to change the ethos and ways of thinking of a slow-moving bureaucracy, in which officers are used to a ‘top-down’ approach. That said, in a submission to the Select Committee on Co-op councils in May 2012, Lambeth insisted that money would need to be invested early on in order to save later – “Lambeth is clear that cooperative ways of working are not always cheaper in the short-term…substantial investment is often necessary when new organisations are formed.”

Walking down Brixton Hill every day, I pass three adverts for the cooperative council. Two of them advertise schemes in place before 2011 and one – volunteer snow wardens – was fantastically unpopular.

The ideas of the co-operative council could prove a clever basis for greater community power in Lambeth, but at the moment my scepticism about the ability of the council to actually put this in place is winning out over my faith in the ideals of our councillors.

SAVE OUR SHOPS: Cllr Jack Hopkins believes “progress has been made”

Brixton Recreation Centre could be demolished under council plans