Protesters took to the streets to show their anger at the increasing gentrification of Brixton – but also to declare their love of the area. 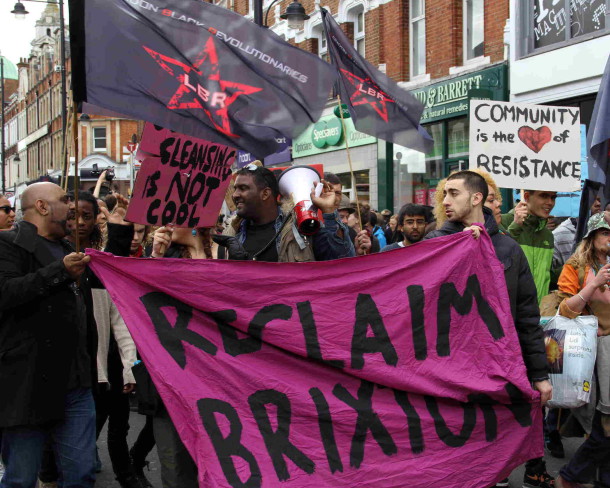 Long-standing residents and communities feel they are being pushed out thanks to huge rent rises and an influx of wealthier people.

The “gathering to reclaim Brixton” on April 25 was as much about celebrating the character of Brixton as it was about highlighting the unwelcome changes. Residents spoke of the vibrancy that the multi-cultural community has and their fear that the area would become just another Shoreditch or Clapham.

And what was clear was that the community would not take it lying down: “We are going to stay and we are going to fight” protesters chanted.

“It was amazing,” said Jose Cardoso from A&C Continental Deli. “It was quite emotional to see all these people coming together, supporting each other and being able to express  the community’s dissatisfaction with the way things are being run.”

Only a few spots of trouble marred the day: one of Foxton’s windows was completely smashed and CS spray was used on a group of protesters at the police station.

The organisers of the protest had insisted they did not want any violence and most of the attendees for most of the afternoon were content to follow this. Of the six people arrested, none were from Brixton.

What the day did do was bring together different campaigns and show just how widespread the problem is.

The London Black Revs, a socialist activist group, who had also organised a march through Brixton Village, waved banners that said “Black communities matter” and chanted “Whose streets? Our streets. Whose Brixton? Our Brixton.”

Brixton Community United, the campaign to save the businesses under the railway arches, organised a human chain, made up of the shopkeepers and their supporters, around the threatened properties. They then marched to Windrush Square, leaving their shops closed – “a sign of what’s to come” said Lorne Mash, from Mash & Sons fishmongers.

In a blog post about the day, Cllr Lib Peck said she found the tone of the demo peaceful and community spirited but “rejected” that estate redevelopments, such as Cressingham, were social cleansing or gentrification.

Peck also said the use of “reclaim” felt “inappropriate” as it did not recognise the positive change that has taken place in Brixton.

However, most who attended said they were not against improvement in the area but did not want it at the sake of pushing the community out.

Valerie Lindo, who grew up in Brixton, said: “we don’t mind if the area gets built up but don’t push us out. The poor are being sold out.”

“We need more affordable housing, the extreme house prices are moving people out of Brixton. It is social cleansing and its breaking up communities. Brixton is losing its originality, we don’t want it to turn into Wimbledon or Richmond.”

Join The Beast of Brixton in Windrush Square