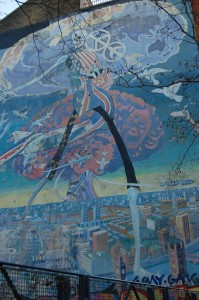 Charlotte Bill was cycling down Coldharbour Lane in the early 1980s when she looked up and there, where before had been a set of plain bricks, was a huge skeleton with a mushroom cloud behind him painted onto the side of a wall. It was the Nuclear Dawn mural.

“It was such a striking image, because the colours were really quite bright at that time and the trees in front of it weren’t there of course.”

Thirty years later and Charlotte is now making a film about the murals in Brixton as part of the project ‘If Walls Could Speak‘, funded by the Heritage Lottery Fund.

“The murals are part of what makes Brixton so different from other parts of London. There are really a lot of murals here in a small area and they are all dramatically different from each other.

“It’s interesting too that they have been done by an artist with the community – in a gallery there isn’t that communication between artist and people, but the murals are part of our every day life.”

The film will include present-day reactions to the murals and audio interviews with local residents about their memories of the paintings. Oral history workshops have been organised so that members of the public can carry out these interviews themselves.

‘If Walls Could Speak’ is not just about the film. Ruth Miller, who founded the London Mural Preservation Society, has been heroically leading walks around the murals for several years. The funding for the project now means that she can create a heritage walk so that anyone can follow the trail themselves. And on Lyham Rd, Vinnie O’Connell will lead a repainting of the Windmill Mural, which as a passer-by he helped the artists to paint in 1983. Local people are being invited to design a new central panel for the mural and repainting sessions will start on 20 May.

Brixton Windmill looking for your ‘Mill Memories’ from times past