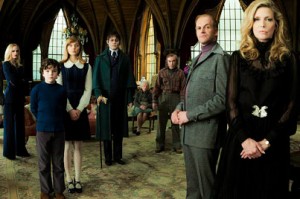 Dark Shadows is the latest quirky offering from Tim Burton. It stars Burton go-to guy Johnny Depp as Barnabas Collins, an imprisoned vampire who is inadvertantly freed from his tomb and returns to his ancestral home where his dysfunctional descendants are in desperate need of his protection. While the usual care has clearly gone into the film’s design, there’s nothing here that will convert you to Burton if you’re not already a fan. The story meanders and the whole thing feels a bit one-note, but Depp seems to be having fun, while Eva Green is excellent as his nemesis Angelique Bouchard.

Battling against Depp at the box office this week is his ex-partner Vanessa Paradis, who stars in the intriguing Canadian drama Cafe de Flore. Paradis is Jacqueline, a struggling young mum attempting to raise her son in 1960s Paris. Meanwhile in modern-day Montreal we’re introduced to Antoine (Kevin Parent), a jet-setting DJ who has ditched his childhood sweetheart and their two kids for a new lady. The two stories interweave to surprising, often moving effect.

From Wednesday, Sacha Baron Cohen returns in his latest guise as Middle Eastern warlord General Aladeen in satirical comedy The Dictator. Plot details are thin on the ground, and the general feeling is that this one could go either way. But when Baron Cohen is good, he’s really good. Fingers crossed that this will be closer to Borat than Ali G: The Movie (which, despite the bit where he shouts out “CHICKEN DIPPAAAAHHHHHS!”, is a pretty terrible film).

There’s a really intriguing sounding (and free) event happening on Saturday by the name of Listen, Whitey! The Sights & Sounds of Black Power, in which Author Pat Thomas, who befriended a number of key figures from the Black Power movement over a 5 year period, reads and plays music from his acclaimed new book and accompanying CD.

As ever, there’s some excellent repertory fare at the Ritzy this week. If you like to spend Friday and/or Saturday nights in floods of tears, why not do it in front of David Lynch’s unforgettable The Elephant Man, in which an unrecognisable John Hurt brings serious gravitas to the role of the tragic John Merrick. Then there’s Paul Verhoeven’s excellent sci-fi satire Robocop. For those of used to seeing edited versions on ITV (I’m sure this film used to be on almost every night of the week when I was at school), this screening provides an excellent opportunity to lap up some seriously gratuitous violence on a grand scale.

Album of the week: Dread Beat an’ Blood by...

Album of the week: Dread Beat an’ Blood by...

1 July, 2017
We use cookies to ensure that we give you the best experience on our website. If you continue to use this site we will assume that you are happy with it.OKPrivacy policy