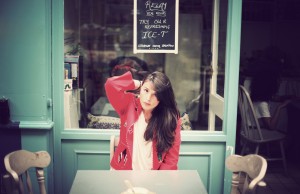 Singer and south Londoner Jessie Ware has just released her first single, ‘Running’, to much acclaim. In the past few years, she has collaborated with highly-respected producers such as SBTRKT and Sampha and sung with Jack Penate and Man Like Me. She was brought up in Clapham and, after a stint in Brixton, is currently back home again while she looks for a new house in Brixton. We interviewed her for our ‘Brixton People’ series

“I was brought up in Clapham and I’m living there again at the moment while me and my boyfriend look for a place in Brixton again. I love south London. I didn’t realise until I went to live in Hackney for a bit how much I loved it. Hackney was cool, but I felt like I was missing out on things happening in south London.

It wasn’t so bad growing up here at all – apart from kids getting mugged at the end of my road when they got off our coaches from Alleyns (a private school in Dulwich)! But they were probably asking for it really – taking coaches instead of public transport! It wasn’t so bad. It’s weird speaking to north Londoners who are completely petrified of south London.

I’ve always liked Brixton. I’ve always found it kind of intriguing. You have the Ritzy, which I love, and I used to go clubbing in places like Mass all the time when I was younger. It’s obvious to say it, but it’s very mixed. I just think it’s very real. I am all for Brixton Village too. Give me any reason to brag about Brixton and I will. I think it’s come on leaps and bounds in the past few years. I think people used to be really scared of Brixton which is a madness really. For people like us who have grown up in and around Brixton I never got an intimidating feeling about it. I love that there are so many good places to eat here now.

I think growing up in London did shape the roots of my music. I guess from going clubbing and listening to a lot of dub and garage when I was younger, it definitely shaped me at the beginning because I featured on a lot of dance people’s stuff. My idea of what I want to do now has matured and isn’t so dance heavy. But I have very fond memories of going to Mass and raving there totally innocently. You had about £10 and could only really afford to have one or two drinks.

It’s pretty scary doing stuff on my own, rather than featuring on other people’s music. I didn’t love it at first, to be honest. I love collaborating. I’d either been a backing singer, like with Jack (Penate), or with the dance stuff helping out a really great producer or a beat, so it was quite daunting to be at the forefront.

I definitely feel more excited now. It was a great feeling when I wrote ‘Running’. It felt like ‘me’. I have been so happy that people like it. I’ve made an album with a producer who lives in Lewisham and used to live in Brixton – he’s been in south London all his life too. I feel very nurtured by the people around me.

The album is kind of ready so I think it will be out around September. I’ve got another single out in a couple of months and I’ll be playing at festivals and hopefully build up a repertoire for a live show. I’m still going to keep on writing this year too and see what comes out of that.

It’s really important to me to play in south London – I really want to do that. I did the video for ‘Running’ in the beautiful Brunswick Cafe in Vauxhall.

What do I like most on arriving home in Brixton? Coming down Acre Lane, with the Ritzy in front of you, the Town Hall to the right and McDonalds – it’s a horrible crossroad but it gives me a good feeling for some reason.

My favourite spots in Brixton are Honest Burger or I just tried that really good Japanese place in the market, Okan. It’s naughty Japanese food – I didn’t think that existed! I’ve won over a lot of people to Brixton y taking them to Brixton Village. I also really love the shop BRIXI. I bought an amazing piece of artwork there and they support local artists. There’s such a good community spirit in Brixton at the moment and you really see that from all the people on Twitter talking about it – it’s really lovely how excited people get.”