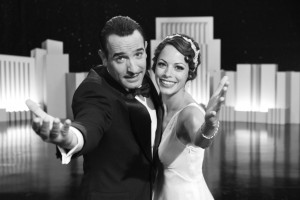 The Artist, which won 3 Golden Globes at the weekend, is a modern (almost) silent movie. Should that put you off going to see it? I furiously shake my head and cut to a placard with “NO!” stamped across in Art Deco type.

The ‘artist’ is George Valentin, a successful silent movie actor who believes wholeheartedly in his trade. However, it’s not long though before the studios are putting everything into making ‘talkies’ and Valentin is left by the wayside. While on his quest to defy talkies and protect his quiet profession he falls for an up-and-coming talkie starlet and they do-si-do in and out of the limelight.

The story pulses in short fade in / fade out sequences and it jumps high with humour and dives low to despair. The film is visually beautiful – shot and lit like a classic silver gelatin print, and employs inventive visual trickery. The score is unobtrusive but very effective in creating tension and nodding to the expertly timed slapstick moments. I was instantly won over by Jean Dujardin, who plays Valentin with gusto and charm. I haven’t even got round to talking about Uggie, his Jack Russell sidekick, who steals the show many times.

The best word I can think of to describe The Artist – and it’s one I rarely use – is marvelous. I am now jumping up and down with jazz hands and the placard reads: “Go and see it as soon as you can!”

The Ritzy is the perfect place to see this film. Eugene Lauste, the man who first recorded sound onto a film strip, did it here in Brixton and there’s a plaque saying so in the foyer.

Jack Roche is Creative Director at Proper and Prim, a design studio based in south London.