New tenants are set to open ventures in premises on Coldharbour that each, in their own way, once represented much of the Brixton that is now disappearing.

Lambeth council has received an application for a revised licence for the former Club 414 on Brixton’s Coldharbour Lane.

It comes from a company, Coldharbour APL, whose four directors are all senior members of the New York based finance company Angelo Gordon, which also owns Brixton’s covered markets in a joint venture.

Like the covered markets, 414 Coldharbour Lane was sold to Angelo Gordon by London and Associated Properties.

Since the mid-eighties it had housed a venue run by Louise Barron and Tony Pommell, who kept late-night clubbing alive in Brixton at a time when it was under severe threat.

This was not enough to save their jobs and home, however. The new owners refused their request to continue to run the venue.

Although Hondo Enterprises announced in 2019 that it had bought the 414 premises, neither Hondo nor McWilliams appear in the official government listing of current owners.

Another licensing application, this time for 404 Coldharbour Lane – the former premises of the legendary Blacker Dread Muzik Store – is in the name of AG Hondo Market Row BV, which is registered in Amsterdam.

One of its directors is Taylor McWilliams, the other three are senior Angelo Gordon staffers, two of whom are also directors of the company which owns 414 Coldharbour Lane.

The new 404 licence application is for recorded music, supply of alcohol and late night refreshment. The hours sought for the premises are 10am to midnight.

Neither application has been granted yet and representations about them can be made via the planning section of the council website until 8 December.

A small kebab chain, Le Bab, is to open in the former Ms Cupcake premises at 408 Coldharbour Lane which also has a frontage on Market Row.

Aiming to become “one of the best kebab houses in the world”, Le Bab already has restaurants in Soho, Covent Garden and Old Street.

Owners Stephen Tozer and Ed Brunet in May this year sought a licence for their new establishment that would see it open until 1am from Monday to Wednesday, until 3.30am from Thursday to Saturday, and until midnight on Sundays.

• This article has been amended following a request from the Lowick Group, a consultancy employed by Hondo Enterprises. Lowick asked us to clarify that the licence application for 414 Coldharbour Lane is not a new one, but seeks minor amendments to the existing licence arising from changes to the internal layout of the building. 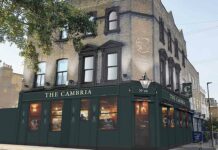