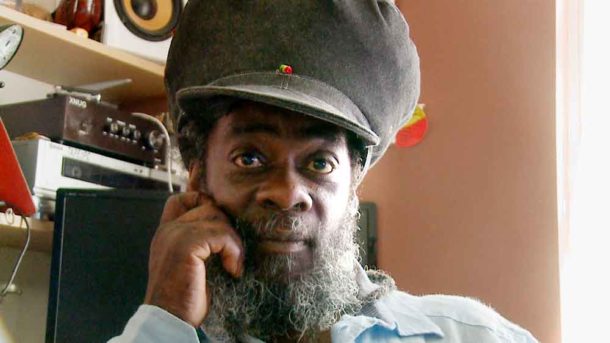 Christened Steve Burnett-Martin, Blacker Dread came to Britain to join his parents when he was eight. He hadn’t seen his mother since he was a baby and didn’t recognise her.

He told his elder sister that she wasn’t his mother and he wanted to go back to Jamaica. He stayed and he learnt to love his mother as witnessed in the emotional opening scene, that starts with her funeral.

Blacker was asked to take the entrance exam to a local grammar school twice. The school believed a young Black man from Jamaica could not possibly have passed. But he passed again and was accepted into the school in Penge.

Education is crucial for Blacker. His youngest son had troubles at school and was in danger of being excluded and labelled for life. Blacker decided to send his son back to Jamaica where the child has surpassed all expectations and is regularly in the top 10 of his class.

After running away from home at the age of 15, Blacker used to lug around the giant speakers as a box boy with the famous Sir Coxsone Sound System. He stayed with the sound for more than 27 years – from box boy to record selector.

He became a world-class record producer working with the likes of Sugar Minott, Beres Hammond, Gregory Isaacs, Dennis Brown, Luciano … the list goes on and on.

At the age of 30, he opened his shop on Coldharbour Lane. It became a focal point for the community. Mothers, friends, police, councillors and the rest flocked to the shop for advice. Sadly in the documentary, we are witnesses to the closure of the shop.

What came across to me when watching the film and then speaking to Blacker later is the impression that he feels so bad about the prison sentence that you can only just about drag the word “prison” out of him.

Blacker’s son Solomon was shot and killed by an unknown assailant on the last day of 2004. The police have never had a conversation with him about his son and the terrible killing.

We see Blacker join the family of Quamari Serunkuma-Barnes, a schoolboy who was stabbed to death in West London. That really is when we become aware of how much influence this man really did have in the Brixton and wider community and, of course, how the killing of his son makes him want to help and campaign against Black on Black crime.

There are some light-hearted moments in the film as we get swept along with Blacker’s charismatic friend Naphtali.

When Naphtali can’t find a parking space he looks at the camera and asks: “Do you think we can park on the corner?” As he steps out the car we see that he actually parked on the corner, not around it but right across it.

The judge at his trial for money laundering told Blacker that he was “a failure”. It’s a throw-away remark that judges a whole life by a single mistake.

The film shows how much more there is to know and learn from a life that, as the film’s publicity records, has experienced three generations of educational inequality, racism, cultural isolation, lack of employment opportunities, crime and violence, but also an extraordinary sense of togetherness and community spirit, and a vibrant musical culture which has done so much to shape today’s UK music scene.