Brixton’s Dalberg Road will soon be home to an art installation celebrating the ordinary and extraordinary stories of local people.

It is part of a wider project ”From where I’m Standing” by the locally based Empathy Museum, made with the support of NHS England.

Its online photography and audio installation will tell diverse stories from people around the UK as a record of life in 2020.

It will be available online from Thursday (10 December) and in Dalberg Road, where physical photographs will be displayed alongside QR codes giving access to audio interviews, first in London and then around the UK.

From Where I’m Standing is made up of 34 portraits, each accompanied by an audio story and a photograph of an object that reflects life in 2020 for the individual.

Spanning the length of England from Truro to Harrogate, the stories include nurses and doctors, an imam working in the Nightingale, an undertaker, a rapper, the director of longterm planning for the NHS, checkout staff and a care home entertainer who secured the job to see her dad.

Local people who feature include:

Avi – nominated for being a fantastic next door neighbour

Charlene – nominated for her role at Pavilion Pharmacy, Brixton

Kate – nominated for the work of Brockwell Park Greenhouses

Jenny – nominated for her work on the till at Sainsbury’s

Natalie – nominated for her work heading up the House Gospel Choir

All images are by local local photographer Amit Lennon.

Intended to create a museum archive of the period – recording in real time what will become a key historical period of the 21st century – From where I’m Standing looks at what the pandemic has to teach us about empathy as well as exploring resilience, wellbeing, interdependence and what sustains us during challenging times.

The project has four strands shot by four award-winning photographers:

Through other people’s eyes

The Empathy Museum creates immersive projects that help audiences to look at the world through other people’s eyes.

Its work is built around the model of an alternative High Street, where each project takes the form of a shop where visitors are invited for a human interaction rather than a consumer experience.

From Where I’m Standing continues the journey along the High Street in Brixton – as an estate agents from 10 December.

Photographs and QR codes will be installed on “for sale” signs along Dalberg Road. There are plans for further street installations around the UK.

Clare Patey, Empathy Museum founder, said: “In a world rife with division and in the midst of a pandemic, listening to these storytellers, with all the wisdom, kindness and generosity of spirit that they share, has inspired me, moved me to tears at times and ultimately given me a renewed faith in humanity.”

Ruth May, Chief Nursing Officer for England, said: “The inspirational stories that have been brought together here show how important it is to understand what it is like to see the world from another point of view.

“Nurses and midwives are far more than their job or uniform and this piece of work will help them be seen as resilient, independent people.”

Amit Lennon specialises in intimate portraits. His work encompasses subjects as diverse as UK prison reform, coal mining in the arctic, stargazing in Chile’s Atacama Desert, or remaking the FA Cup. The National Portrait Gallery purchased his portrait of DJ John Peel for its permanent collection.

Lottie Davies is a BAFTA-nominated travel, editorial and fine art photographer. Who has won many awards including awards Association of Photographers’ Awards, the International Color Awards, and the Schweppes Photographic Portrait Awards.

Myah Jeffers is a Barbadian-British documentary and portrait photographer, dramaturg and director. She is currently the Literary Associate at The Royal Court and the 2019 Portrait of Britain winner. Her work is focused on Black experiences and aims to use portraiture to illuminate Black and queer joy as acts of resistance.

The project is supported by Arts Council England, NHS England and the Health Foundation. 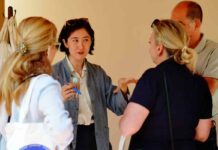 Breaking bass: Simonon smash is frozen in a steel sculpture