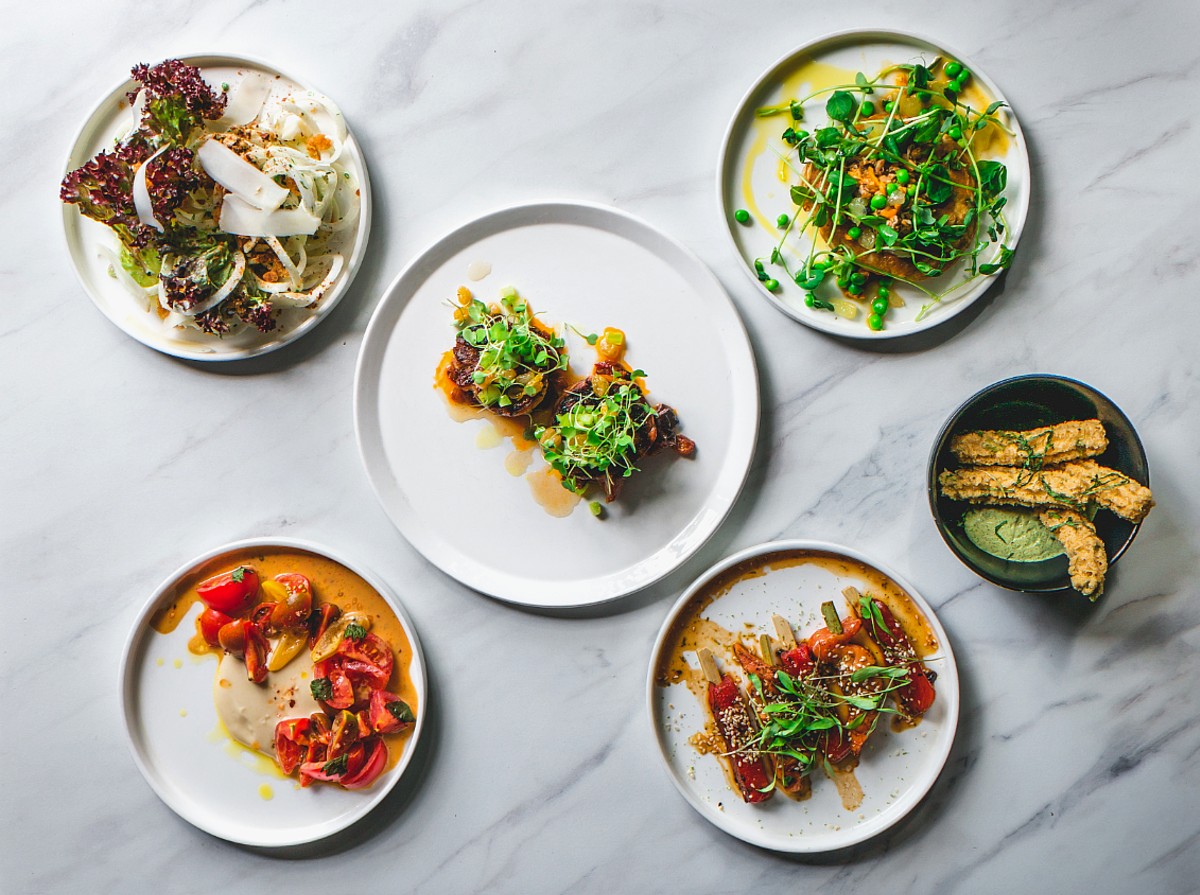 So, I am in possibly the most creative sea container in town, sampling the latest incarnations on Smoke & Salt’s relentlessly creative menu while Remi Williams and Aaron Webster tell me all about their latest “project” (and make funky Mocktails for my daughter who I have dragged along). Seems it’s time for Smoke & Salt to spread its wings, with a little help from their friends. 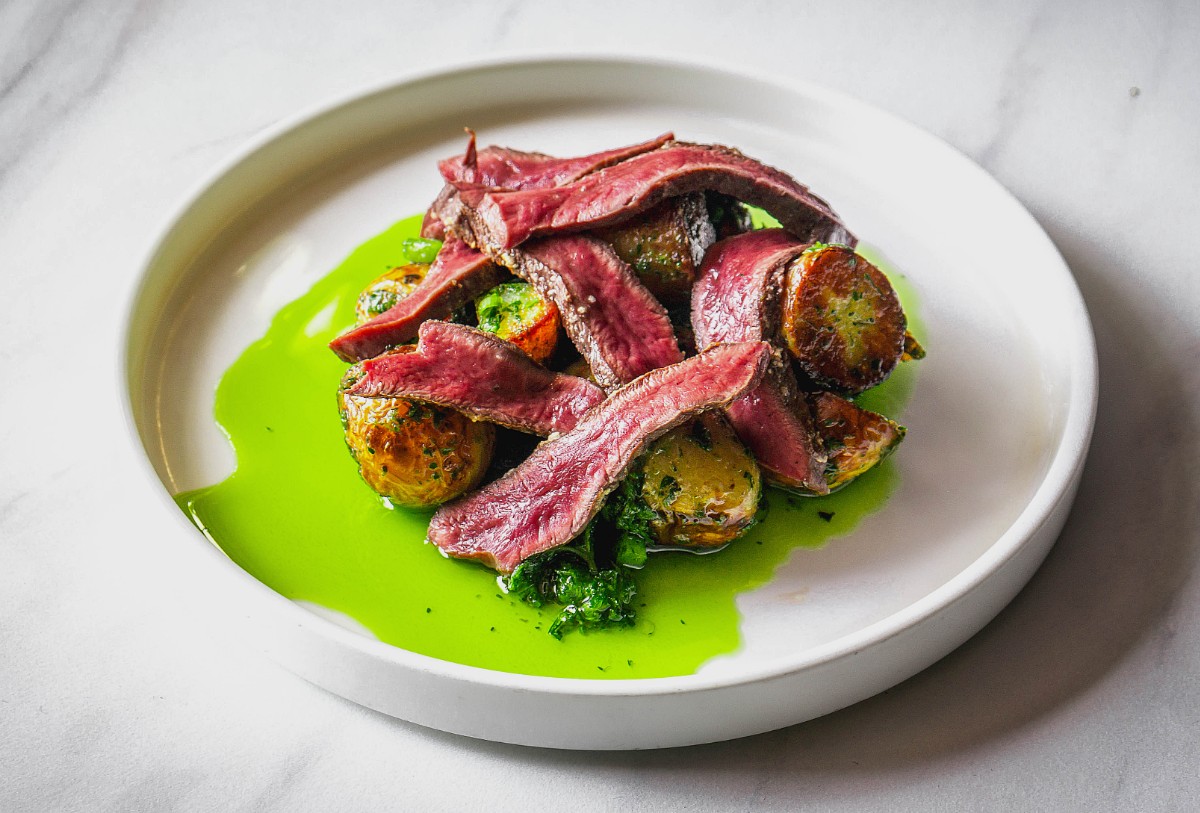 For those of you who have been living in a culinary cave, Remi and Aaron have been serving creative small plates featuring “heritage” curing, smoking and preserving techniques from a microscopic kitchen.

If you come here for nothing at all, come for the chimichurri potatoes with beef heart. Close to a signature dish, as there would be a (well mannered) rebellion if they took it off their menu. 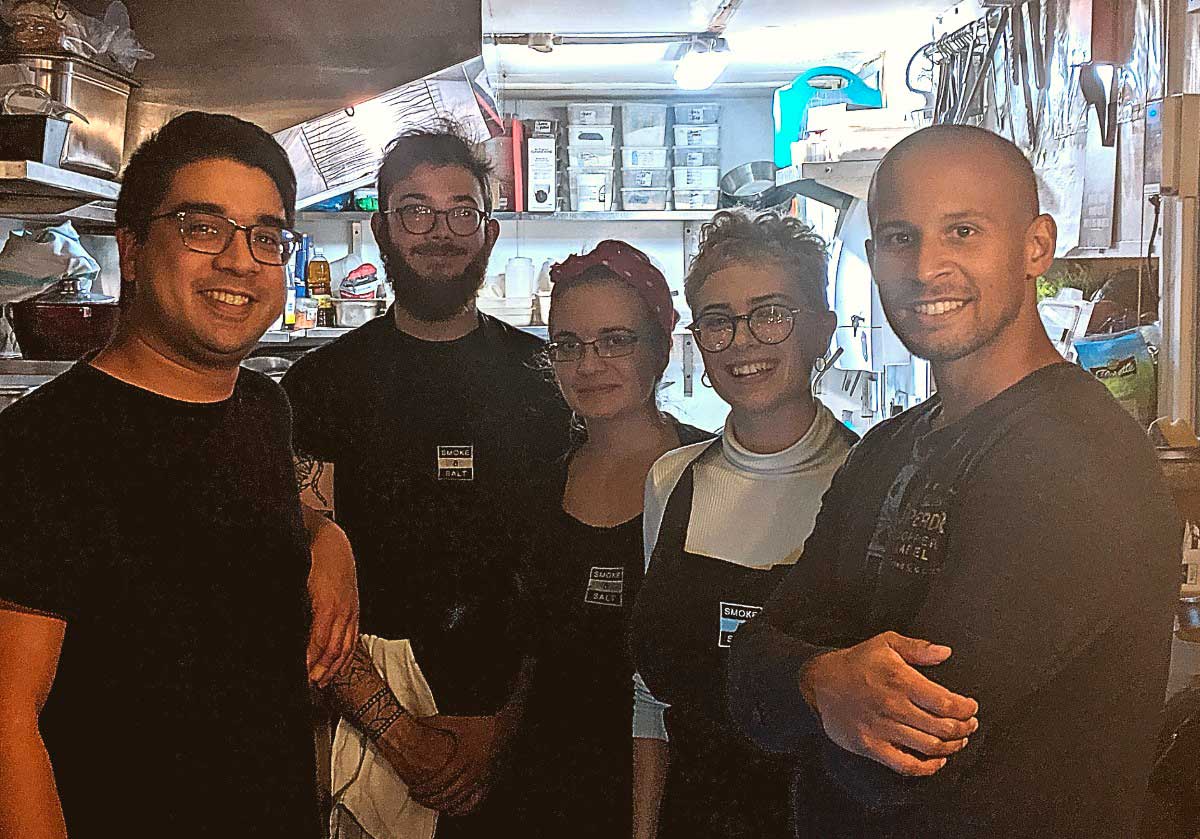 So, we ordered that, of course, while trying pumpkin churros with mildly spiced yoghurt and, refreshing simplicity itself, summer tomatoes with yeasted mayo and smoked chilli.

As we speak, they are putting together the final details on their crowdfunding launch. Live since mid-October (for 40 days), in a theoretically similar path to Kricket and Trattoria Franzina, it is time for a bricks and mortar site. Rumour is it may be Tooting, due to Brixton’s ever challenging rents. 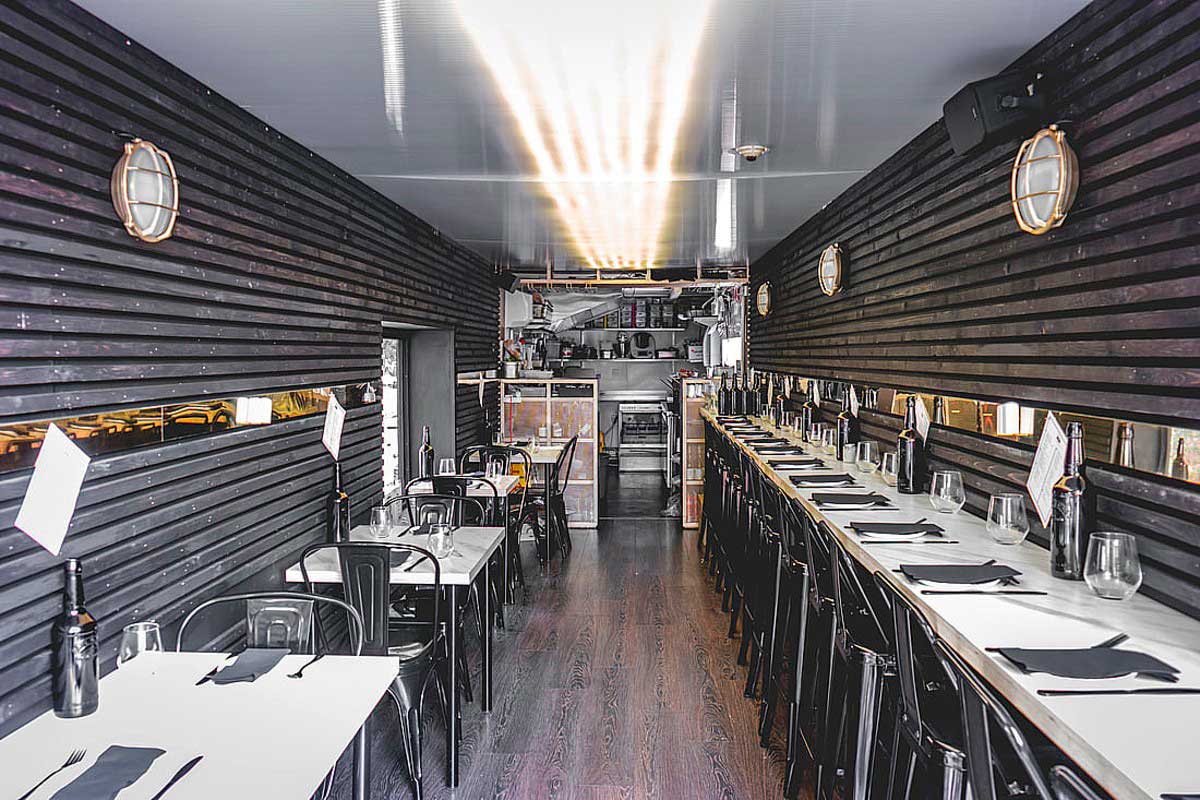 So, via Seedrs, Aaron and Remi hope to raise £140,000 to turbocharge their move. I get the sense they are excited (not least by a kitchen they can expand their ambitious cooking into) but tinged with a sadness as the sea container shall be no more.

Alongside trout and watermelon skewers, a chargrilled hake steak with beans, salsa verde and saffron aioli are apt reminders of the quality of their “ancient techniques” and modern small plates. Accompanied by their current house white, a 2018 Loureiro vinho verde from Portugal. 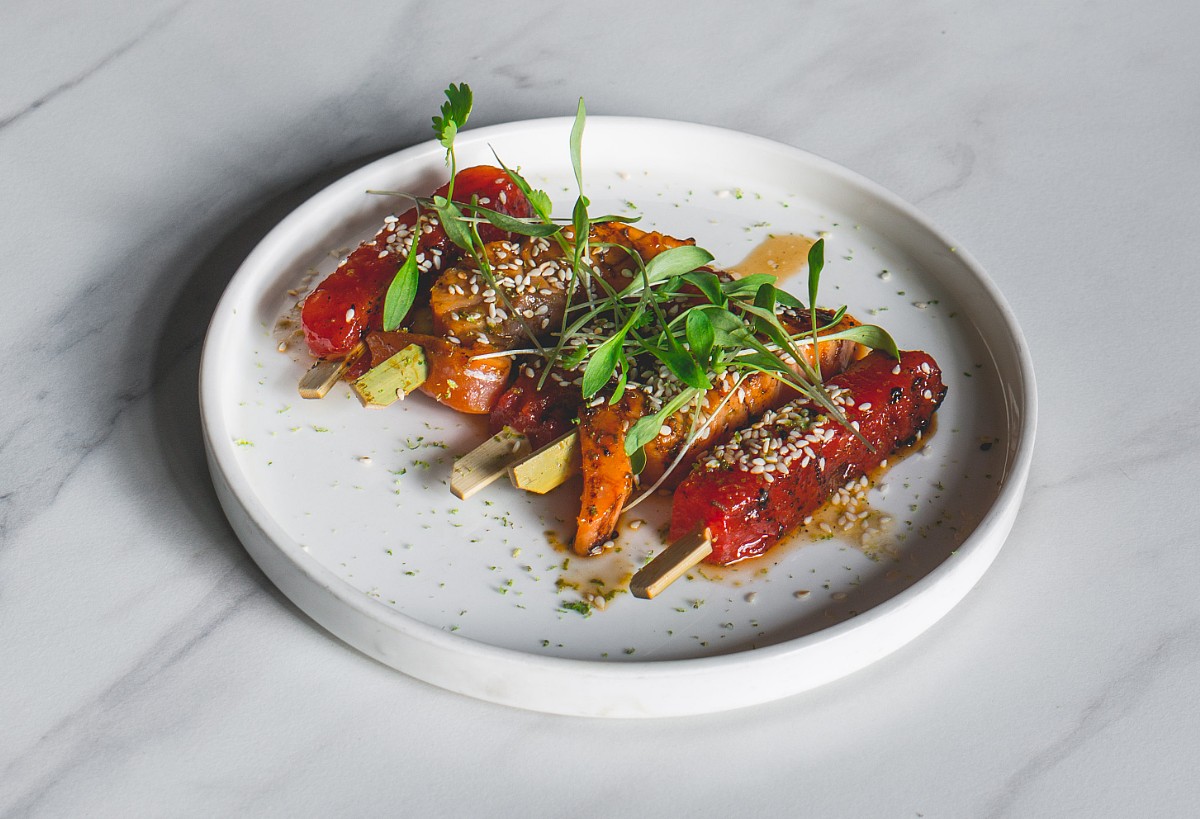 Seasonality is a key factor in the menu, which changes every two months, and their commitment to “cheaper” cuts of meat and experimental combos (I think Aaron is the mix and match ideas guy, Remi makes sure it happens).

And sometimes, seeing what they can get a good deal on with their suppliers, and create from there. Tried, tested and matured at supperclubs before sea container. Now the big jump. 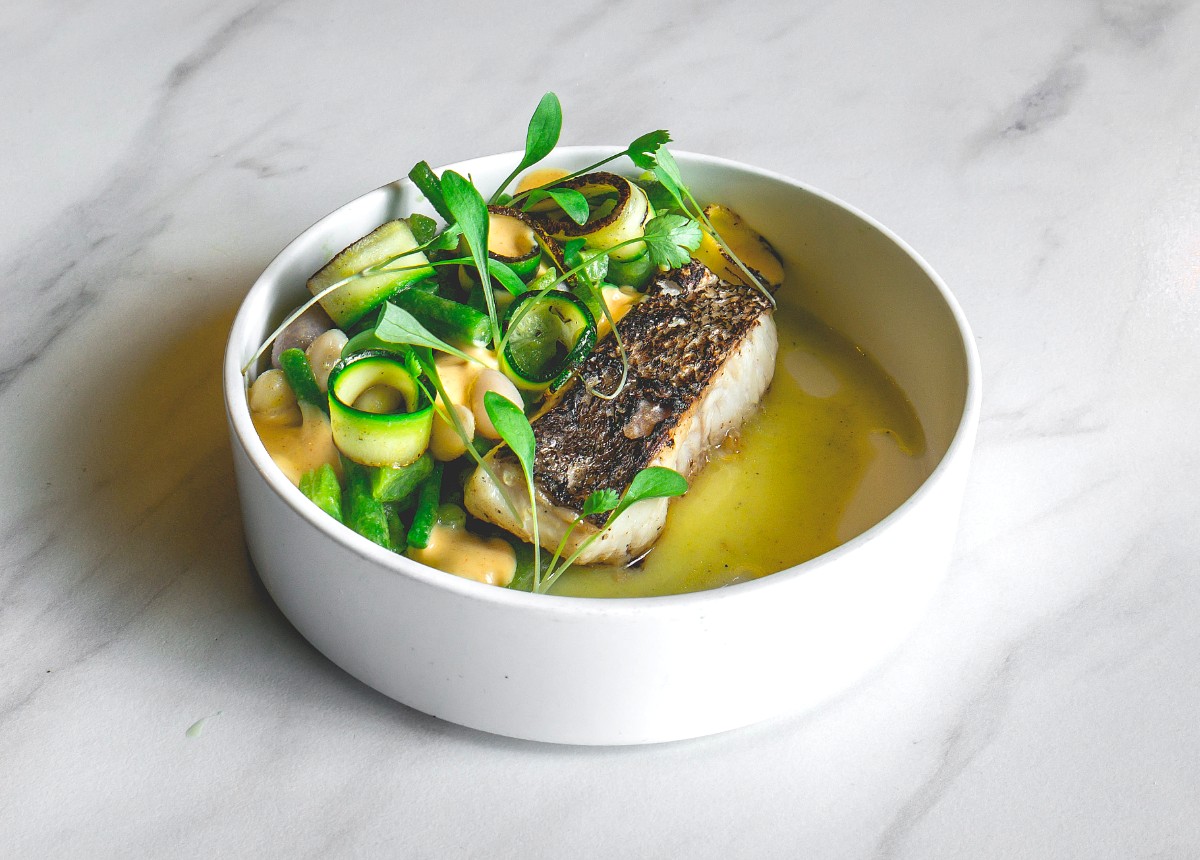 Sound like it might be fun. Investors, as well as owning a share in Smoke & Salt, will enjoy “exclusive perks” from Aaron and Remi who are going to be having a bit of fun with those ideas. Aaron says: “The idea behind this is that our community has been so engaged with what we do, so it’s exciting to give something back to those who help us get our first restaurant off the ground.” Remi chips in, “It starts at £10 and there are a range of rewards depending on how much you invest. But, let’s just say, some of them, money can’t buy.” 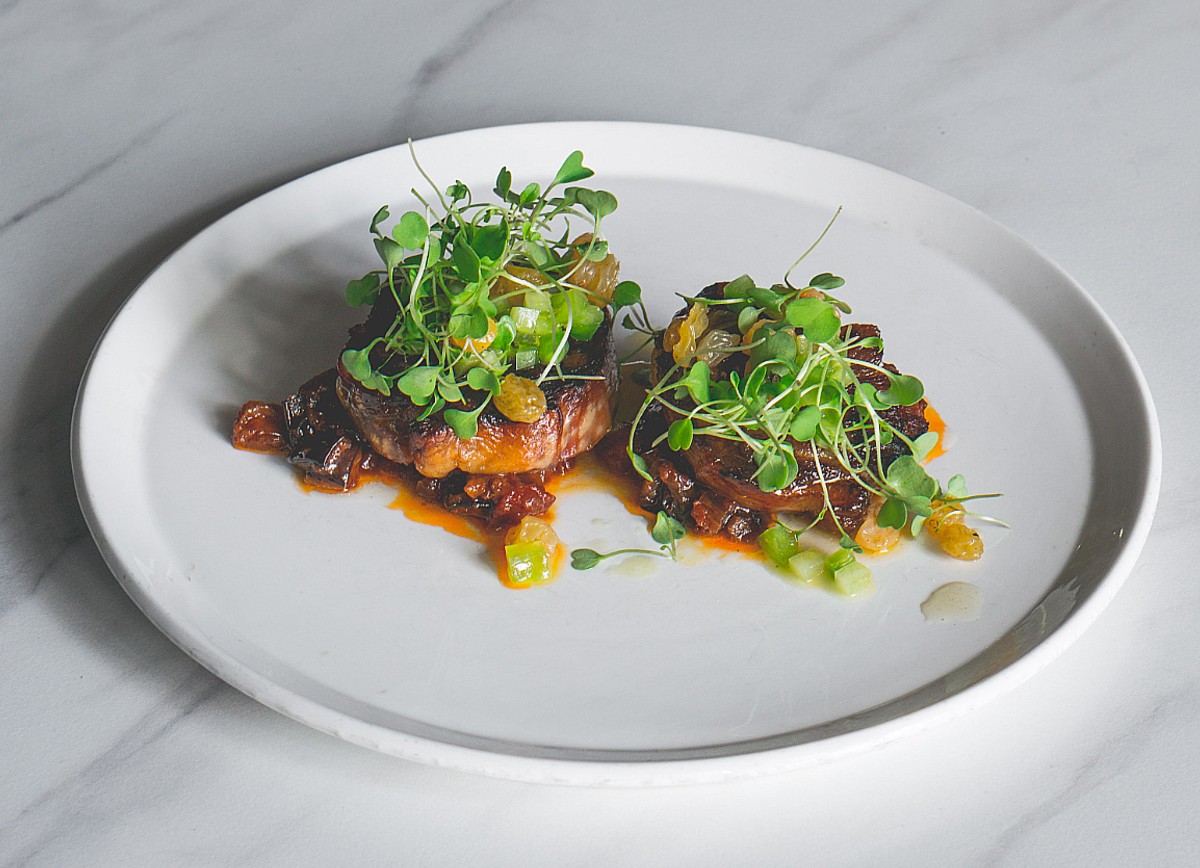 We finish off with lamb porchetta (yet another almost waste cut, diligently rendered) with aubergine and caponata. Robust, meaty and tender. Every dish has little surprises, extra diligence, extra technique. Even if it is ultimately out of SW9, whether with your wallet or just hopping on the bus to Tooting, Remi, Aaron and their growing team’s next journey is going to be interesting. Find out more at: smokeandsalt.seedrs.com

Take it away Brixton