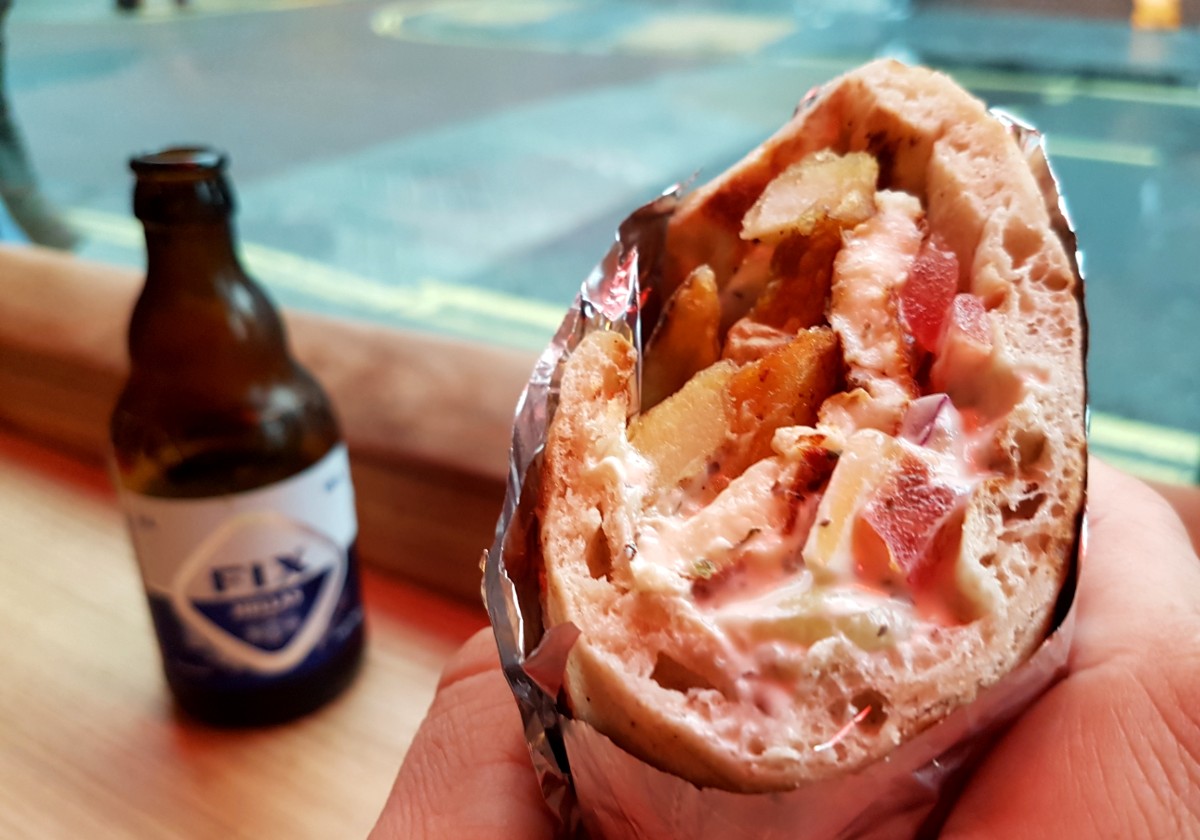 Nick Buglione is back on souvlaki street at Mikos.

Italy, street pizza and endless Mortadella, France, baguette and camembert (again) and, from Greek island to Greek island, souvlaki. Like the New York hotdoggers on every Manhattan corner, souvlaki is real street food, cooked on street, bought on street, eaten on street.

Back then washed down with Ouzo, and more Ouzo. Tonight, we are happy on Greek Fix beers. We is all grown up.

I can forgive Mikos’ Hugo Yoshida for taking souvlaki indoors and giving it a bit of upgrade, Brixton isn’t quite downtown Naxos, even on a sunny day. Back then, on the way back from the beach or club, it was ubiquitously chargrilled pork skewers on street corners. Mikos is rosemary rub and for the less carnivorous, halloumi or portobello mushroom.

Hold, on, what about the Mikos on Acre Lane? Still there as a predominantly delivery kitchen for the ever-increasing hordes of people for whom leaving the house to eat is an unwelcome distraction from Insta. And presumably think a waiter is a man in a helmet on a scooter. I’m old school and hate phones so I’m here in person.

Not too many decisions to make – pick your meat/s, your sauce and go. Puffy charred pitta bread, marinated meats on the grill, rosemary chips and tangy garlic-infused sauces. Simples. As Hugo, anyone from the Cyclades, and souvlaki fans know, the chips are essential.

Whatever you have chosen comes in pittas or plates (open-plan pitta, oregano chips, dip, salad) with a variety of “fillings”. Pick and mix. You can throw in halloumi and feta top-ups and choose from tzatziki, souvlaki or hummus saucery. Sprinked with paprika for additional piquancy.

We had the chicken, the lamb, the pork and pimped them both with halloumi. And yes, it takes me back. This is my comfort food, circa mid-90s. The lamb could possibly have been a bit pinker (pour moi), and my favourite is still the (traditional?) pork, but all the meats have been rigorously acquainted with a classic oregano-olive oil-lemon marinade and blasted with heat, flame and smoke.

Pittas weigh in around £6 or £7, plates £7 to £8 and one with a side of rosemary chips is a meal in anyone’s book. We are obviously dedicated professionals who had to eat most of the menu. I don’t know why souvlaki has never really arrived in the first, second and third waves of “streetfood” but it should have done, and not just so I can rehash edited memories of my Interrail years.

Mikos isn’t doing anything to get Michelin judges scribbling in notebooks or the “everything must look like Kendall Jenner” generation mainlining glamour shots of their supper, but how about you just enjoy the meaty (and cheesy) simplicity of souvlaki, herby frites and a beer.