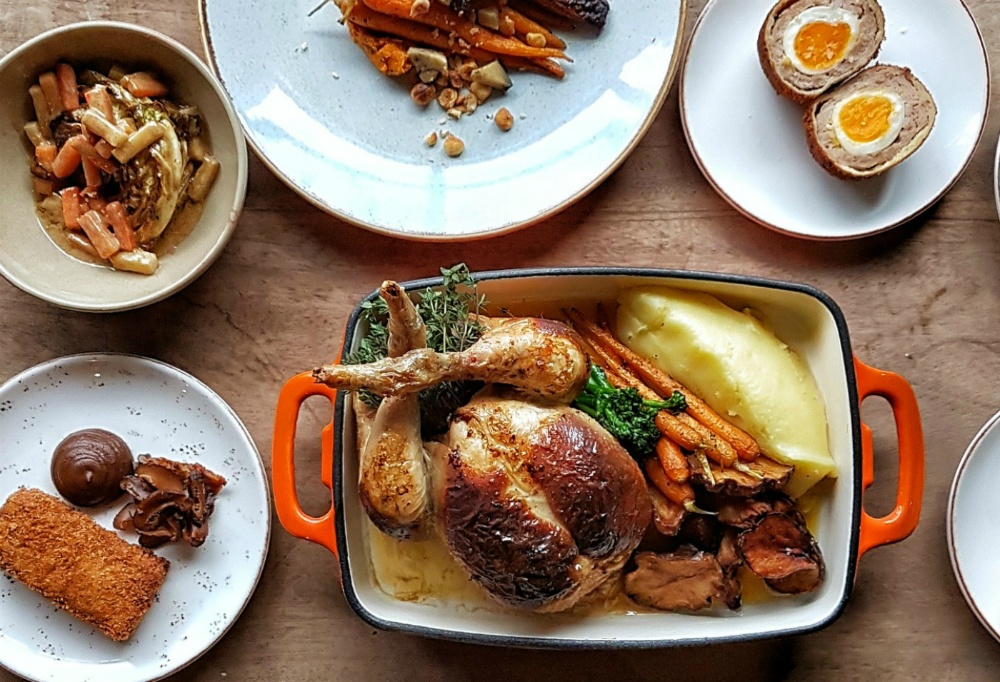 Last Christmas, Santa popped Italian truffles into my stocking, the foodie/aspiring foodie’s favourite fungus after the morel. As yet, sitting clueless in my pantry with an undetermined future.

So, I am interested in local indy pub King & Co’s latest kitchen takeover by streetfood funghi-meisters Truffle, departing from their kerbsides and foodie markets to come indoors. From trademark burgers to classic street snackery and big meats, the musky, perfumed, heavily umami flavour is sprinkled semi-luxuriously in and out of Tom “Truffle” Bickers’ menu. Street food staples meet the caviar of funghi. In a pub.

Like a boxer after the weigh-in, my buddy Michael has just run a marathon so is happily rewarding himself for his recent 26 miles

I declare my hand here, I am not your classic “pub man” and a relative novice when it comes to the ways of “carefully curated, daily changing, craft beer tap lists”. But, in an increasingly consolidated world of homogenised unimaginative pub chains and “hipster” chains (owned by the big brewers of course) pretending not to be chains, a proper indy local is increasingly rare.

Not in a knowingly tongue-in-cheek KP naked lady peanuts and Mr Porky’s on the menu kind of way but local, independent and in the case of King & Co, interesting cheffy pop-ups. King & Co is a proper local happy to let you sample their beers until you find your chosen pint. 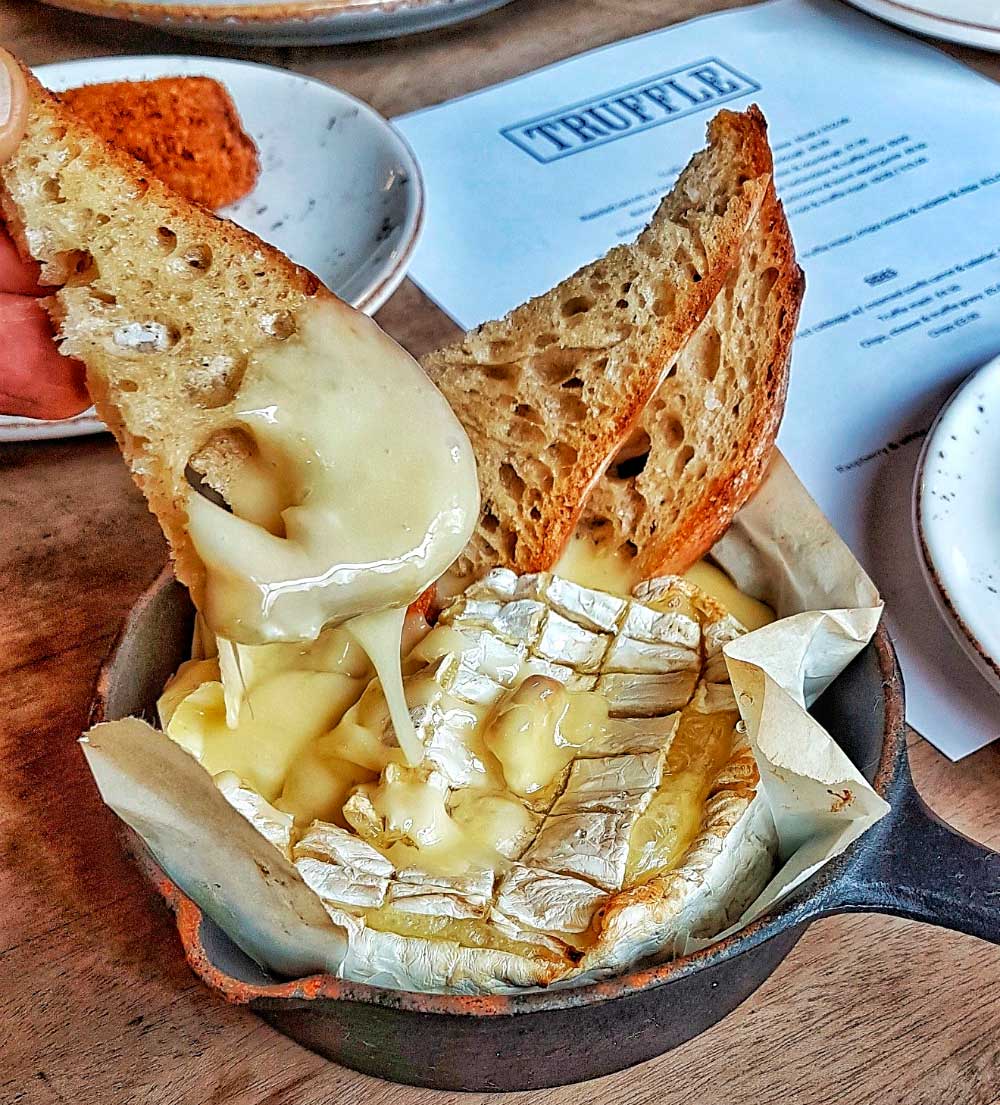 Alongside a dark robust Hungarian Kekfrankos Koch red, my Truffle Scotch egg does what it says on the tin. Not dramatically refined and not the runniest yolk ever encountered but a good egg, with recognisable truffle flavour meandering throughout.

Ditto the classic (hint of Abigail’s Party), Baked Camembert – upgraded with truffle honey and sourdough toasts. Naughty but nice. Like a boxer after the weigh-in, my buddy Michael has just run a marathon so is happily rewarding himself for his recent 26 miles, excavating the last remnants of the bowl with gusto. Turn off the Fitbit and go for it.

I am not such a novice when it comes to the world of burgers (is anyone?). Truffle’s signature rendition is a big bad bouncing boy, beef and smoked bacon, fig jam, raclette (Alpine drippy cheese) and truffle mayo. Turn off the Fitbit and go for it. Ex-dairy dry-aged beef patty, its meaty juices mingling with jammy, cheesy bedfellows and yes, you can taste the truffle adding an extra rich infusion. 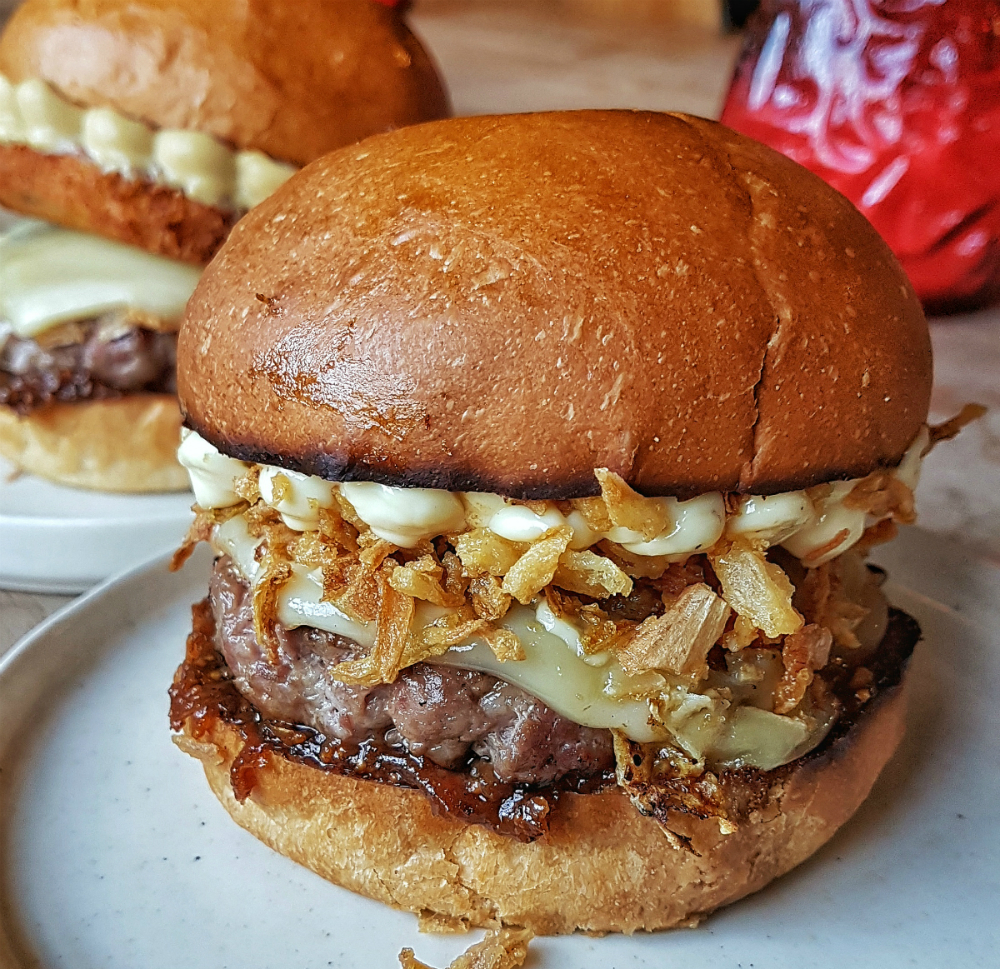 Michael, having recovered remarkably quickly from Camembert indulgence, sets off on quite the Sunday lunch (sort of). Whole roast chicken (think poussin dimension) with a rich foie gras and brioche stuffing, roasted veg and … enter the truffle in an agreeably creamy mash. Well cooked, nicely assembled and just that little bit different – I am stealing the stuffing for next Christmas.

While themed thus, the menu doesn’t overdo the truffle and there is stuff to come back for – I am thinking about the mackerel tartare or the potentially showstopping rib of beef with boulangère potatoes and confit garlic. Truffle are around in Clapham Park Road until the end of March, but the King & Co isn’t going anywhere and the kitchen is worth keeping a regular eye on.