A 250-bed hotel is to be the centrepiece of the £40 million redevelopment of one of Brixton’s biggest run-down buildings, the former Quin and Axtens department store in Brixton Road.

Currently the home of Barnardo’s charity shop, among others, it will be transformed into a state-of-the-art suite of offices, shops and artists’ studios as well as nightclubs and the hotel. 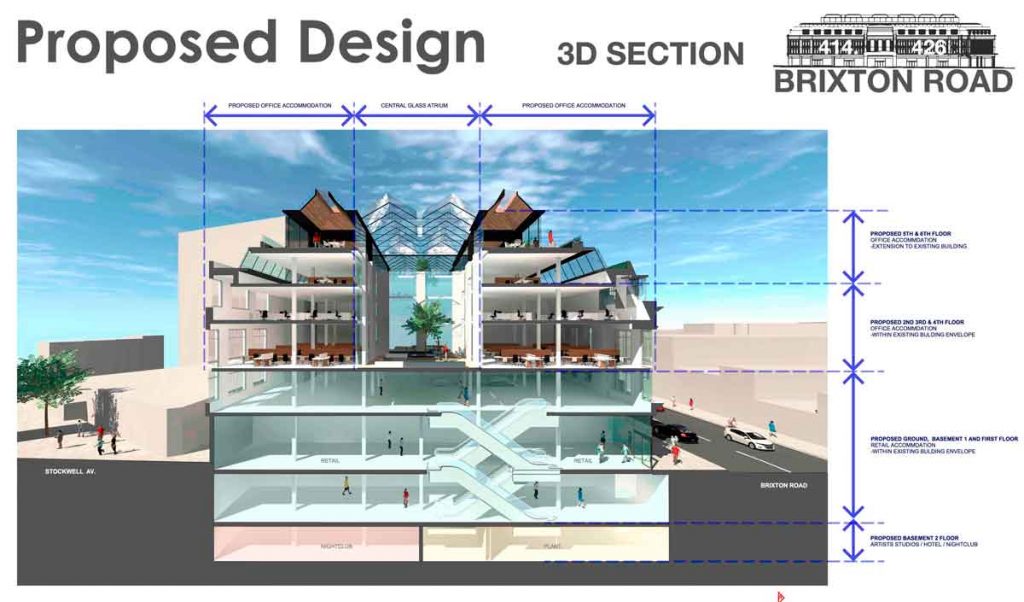 The façade will be retained with a polished plate glass and white tiled finish. Behind it there will be two atriums with glass roofs.

Alongside the lavishly restored Squires building on Ferndale Road next door – the former Post Office, with its Department Store cafes, bars, restaurants and architects’ studios – it will mark a significant step towards the poshification of Brixton. Like the Squires Building it will feature a rooftop bar.

The developers, Crown Properties, mounted an exhibition this week (December 12-13) to which they say they invited “a lot of local people and organisations” to seek their reactions. The Brixton Blog will report some of these shortly.

The hotel will likely be more upmarket – “perhaps more boutique” is the expression of architect Paul Winkworth – than the Premier Inn on Coldharbour Lane or the 90-room budget hotel planned for Dorrell Place on the nearby Superdrug site next to Marks and Spencer. Lambeth Council gave planning permission for the budget hotel last year but no work has taken place and the owners have not applied to the council for permission to begin work. The owners did not respond when the Blog asked them what was going on.

The new scheme will be submitted for planning permission in the new year, with approval likely in early autumn. Planning law puts pressure on councils to nod applications through, since they may have to bear the cost of massive legal bills if developers appeal against refusals.

The developers are in contact with a company in the giant US-based Marriott group, but nothing has been finalised. The hotel will, however, like the proposed budget hotel on Dorrell Place, have windowless basement rooms, which Paul Winkworth said were “popular nowadays”.

The Quin and Axtens building was opened in 1926. It will now have six floors, including two basement levels – comprising shops, offices and studios at the Brixton end and the hotel at the Stockwell Road end. The hotel entrance will be opposite the O2 Academy; events there are cited by the developers as a major source of custom.

The developers say that there will be 800 jobs at the site – though of course there are jobs there already. “There is good news in this application,” said Jamie Bryant of consultants Indigo Planning. “It will be a boost to the local economy.

“The building is not fit by modern standards. It would not be possible to let the spaces when, with the JobCentre leaving the property, it will be empty in two years’ time.”