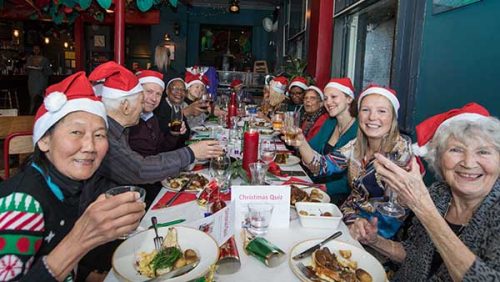 The White Horse Pub on Brixton Hill has teamed up for the with local charity South London Cares for a third year to put on a free festive lunch this week for Lambeth residents living in isolation.

The meal was part of Heineken’s Brewing Good Cheer campaign, which encourages pubs across the UK to host free lunches for people who seldom have the chance to get out.
With loneliness affecting over nine million people in the UK, Heineken believes pubs have an important role to play in alleviating the problem by providing a welcoming place where people can connect with their neighbours and wider communities.
Fifteen older and younger neighbours from South London Cares were treated to a three course Christmas lunch with all the trimmings.

South London Cares is a network of young professionals and older neighbours in Southwark and Lambeth working to combat social isolation and loneliness. They focus particularly on people over 65 and those in their 20s and 30s, as they are the most isolated age groups in the country.

The charity fosters friendships through a 1-1 friendship matching scheme with over 1000 older and younger participants, as well as through their Social Clubs offering up to twenty five free social events every month for people over 65 looking for companionship. Their activities range from technology workshops, dances and choirs, to script reading sessions and get togethers at pubs and cafes.

Charlie Jamieson of South London Cares said: “It is a very special thing for people to share a Christmas lunch with people in their community in a social place. Lots of people live alone, so being welcomed into a local pub and making friends with those they might not usually have the opportunity to meet is making a massive statement.

“We all need to talk to each other more and community places like pubs provide a great space for that to happen, as well as the common ground necessary for people to build bridges with their communities and the White Horse lunches are always very popular. The key thing is that the younger people get as much out of it as older people.” 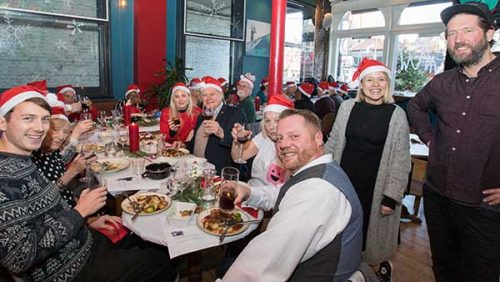 Matt Ward of the White Horse said: “It’s getting harder for people to interact with one another. Pubs have a role to play in getting people out and socialising. Social media, computers and iphones bring everyone together but can be isolating. You’re more connected but disconnected.

“Over the 12 years I’ve been here, the local shops like the greengrocers and the butchers where people used to talk to one another in the queue or at the counter have disappeared.

“This is where pubs comes in – they get people out and you can still chat to the person behind the bar or beside you even if you come in on your own.

“It’s really important to us that individuals feel welcome and comfortable at The White Horse, which is one reason why we’re delighted to be hosting a Christmas lunch for South London Cares again.

“We all live in the same community but sometimes you need to look beyond your immediate surroundings to who else is out there.”

David Paterson, corporate affairs director for Heineken said: “There really is no place like the Great British pub – it’s the place where relationships start, friendships are cemented, and memories made. We believe pubs are at the heart of communities and we’re delighted to be working once again with so many pub landlords who want to make a positive difference not just at Christmas, but all year round.

“We hope Brewing Good Cheer continues to raise awareness of the issue of social isolation and inspires more people and publicans like Matt to get involved and help combat it.”