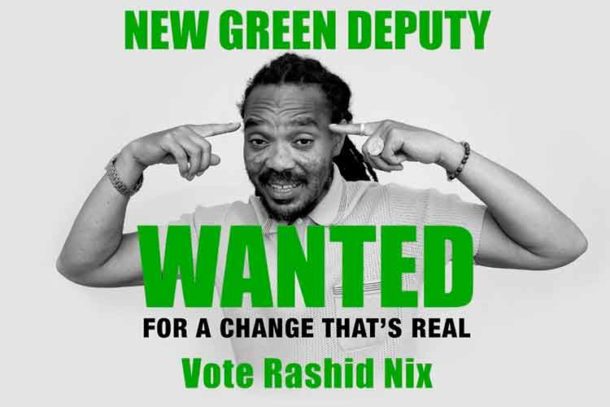 Lambeth already has the party’s national joint leader in the shape of Streatham councillor and leader of the opposition Jonathan Bartley, who is running for re-election as co-leader of the party.

Rashid Nix received 683 votes as a Green candidate in Brixton’s Coldharbour ward in the May local elections. He and Green colleague Michael Groce were the losing candidates with the most votes. Labour party candidates won all three seats for the ward.

In a YouTube video, Rashid Nix describes himself as “the outsiders’ outsider”.

If the Green Party was being portrayed as third or fourth in a first-past-the-post system, this was “a very, very disempowering context to operate from”.

He says that, in the past two years since the “Green surge”, the party had lost one third of its membership – 25,000 people.

He says that Green Party members who urged him to run “wanted something different”.

Rashid Nix says he believes the party should be giving the electorate a choice by being the “alternative party” and that he represents the section of the party that thinks it is time “to embrace something new”.

The rise of UKIP, the far right and the Brexit referendum result showed that there was a political vacuum.

“As Greens, our role should be to fill that political vacuum” – with clear, concise messages that cut through and were easily understood by everybody.

Voting in the Green Party’s leadership election closes on 31 August and the result is due to be announced at its conference in October.

London first as council takes over all local tracing

Help Jason to make a change for a fairer future