‘It was hard but in the long run you find a way to survive’ … Tevye Markson visits the underground shelter that was temporary home for many of the Empire Windrush passengers and meets one of them, 92-year-old John Richards 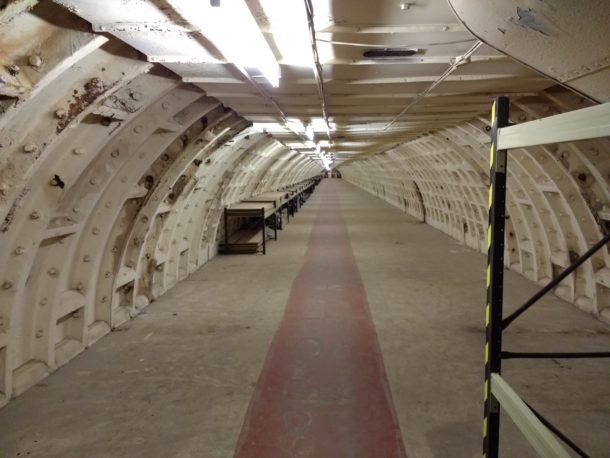 A new tour will allow the public to explore Clapham South’s WW2 subterranean shelter that became a hostel for Windrush arrivals in 1948, many of whom later moved to Brixton.

The exhibition is run by London Transport Museum, which plans to build a surface restaurant and redevelop the underground site, which is now grade-II listed.

John Richards, 92, who lived in the subterranean shelter for three weeks, returned to visit his first “home” in the UK at the end of May for the first time in 70 years.

“The trains that ran overhead in the morning woke me up,” said Mr. Richards.

“There were beds all around with crisp white sheets. They had a teacart at the station and pie in the evening”

After leaving the shelter, Mr. Richards moved to a hostel and then found work at British Rail.

Mr. Richards said: “It was hard but in the long run you find a way to survive.”

TfL assistant Director of collections and engagement and project sponsor Chris Nix, says the intention is to preserve some of the site as an exhibition and transport more of it back to how it used to be.

He said: “We’ve got a good vision laid out so it’s a question of getting the money together to do it.

“Doing anything 40 metres below ground is expensive.”

The shelter, one of eight, was built in July 1944 during the blitz and became budget hotel accommodation after the war in 1951 during the Festival of Britain.

A few years before, migrants from the Caribbean came to rebuild post-war Britain, which had serious labour shortages in housing, transport and hospital work.

After the devastation of WW2 bombing, accommodation was also in short supply.

Clapham South was used as short-term accommodation for the 236 who had nowhere to stay until they could find homes.

All had moved out within four weeks.

It was last used as accommodation during the coronation of Queen Elizabeth in June 1953.

Most of the shelters are now archives, while the Clapham North shelter is a hydroponic farm growing salad.

Public tours at Clapham South begin in August with tickets now on sale at: https://www.ltmuseum.co.uk/whats-on/hidden-london/clapham-south