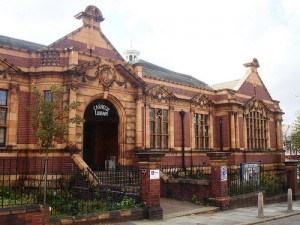 Nobody says ‘sssh’ as the mugs of tea are poured and rows of chairs put out. It’s open day at the Carnegie Library, which perches near the top of Herne Hill, a gathering place in an otherwise quiet residential area.

“We want to encourage the social aspect,” explains Jeff Doorn, who chairs the Friends of Carnegie Library. The quietly spoken man is a passionate advocate for this place, the U.K’s first purpose-built open access lending library. Book browsing and universal access were new concepts in 1906 when it opened its doors; until then, books were hidden and only brought out for those in the know rather than those open to discovery.

The Friends group fears that a reversal of this ethos of openness is what Lambeth Council has in mind with its plans to turn Carnegie Library into what it describes as a ‘community hub’. While they agree with the concept, Jeff says that “certain officers and councillors” take the idea to mean “hiving off parts of the library so they are not open to local people any more”.

A number of rooms throughout the striking red Edwardian building are either currently vacant or set to be, and the Friends would like these to be opened up for community use. “Let’s have a cinema club; a community café; hot-desking for home workers; community gatherings,” says Jeff. He believes that the library can become more of a community meeting place at the same time as more money is raised to keep the library open. But he fears that what the council has in mind to raise revenue is to “rent out rooms to architects’ firms… to turn our library into a business park”.

The Friends welcome Lambeth’s stated intention to involve them in running the library but believe that the council is erecting barriers preventing them from doing so. This group of volunteers who love the library have, in local government parlance, a track record of delivery. They successfully campaigned against the council’s 1999 decision to close it; they succeeded in bidding for over £12,000 that, with volunteer efforts, created a reading garden, a quiet, oasis open to all. But the council is dragging its feet on allowing further work by the volunteers to improve and open up the library.

Jeff says that the council has been reluctant to grant them ‘trusted keyholder status’ so they can organise community events. The Friends have also been trying to find out from officers, without success, what rooms will be available, and when, and what needs to be done in order to open them up. And they are pressing for funds raised from events to be retained by the library, a principle the council has yet to endorse.

Time is of the essence. The library’s revenue budget is halving in a decision made by the council to plug a £750,000 shortfall in its libraries budget. But, at a time when the library needs new income, it currently stands empty for three days a week, due to the opening hours Lambeth set and the current lack of access for the Friends on these days. And much of the building is empty even when the library is open because the rooms are not used.

“We need to get moving. We could be opening up the library for the community. Church halls round here are always booked up. I’ve had meetings at the same time a band is rehearsing next door.” Is he optimistic that the volunteers can turn things around? “I want to be. But sometimes I despair.”

A council spokesman said: “The library budget, like all public service budgets, is under serious stress at the moment. But we have managed to keep all our libraries open.

“Carnegie Library occupies a large building and we’ve been talking with community groups about how to make best use of the available space. Some of the ideas are to generate income to put back into the service and we are keen to examine them, especially given the cuts to our budgets.

“There are a range of things we need to address, like health and safety and insurance liability in case accidents happen in the building, and equality and diversity to ensure everyone in the community has access. We are working our way through each of these issues at the moment.”

A foxy poem for Friday!