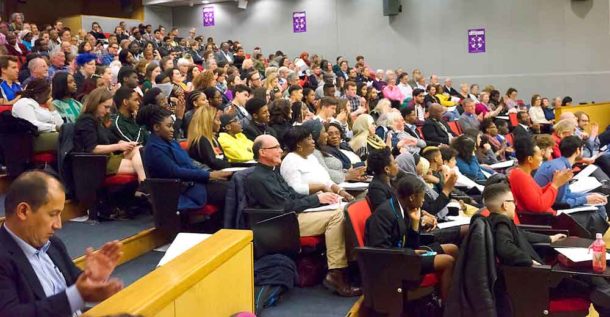 Hundreds of people representing 23 organisations from across Lambeth turned out to press their policies on local politicians ahead of Thursday’s council elections.

The community organisation Lambeth Citizens organised the hustings at the Franklin-Wilkins building of the King’s College, London campus in Waterloo.

Representatives from the Labour, Green, Conservative and Liberal Democrat parties answered questions and listened to advocates of the policies Lambeth Citizens has developed as priorities.

Lambeth Citizens says that the 23 faith, education and community institutions from across the borough that it is made up from represent more than 10,000 people. It describes itself as “a collection of communities with a passion for social justice”.

She went on: “You have plenty of constructive suggestions and that makes those meetings challenging, but they are always incredibly positive. You are both principled and pragmatic.”

Lambeth Citizens members testified to their struggles in areas from housing, to assimilating as a refugee, to university access.

Members questioned the politicians in turn on whether they would back each manifesto “ask”, with a clean sweep of promises coming early on.

Three of the four party representatives either committed to or expressed their support for all ten requests in the Lambeth Citizens’ manifesto [PDF download].

Housing was the most contentious topic.

Local Conservative leader Tim Briggs, who is standing in Clapham Common, questioned the effectiveness of the council’s licensing scheme for landlords and called for stronger enforcement of current council powers.

Lambeth Citizens’ manifesto calls on the council to “hold rogue landlords to account and celebrate good landlords”. Briggs, who runs Legal Mentor, a company that specialises, among other things, in helping landlords to evict tenants, argued that bad landlords do not sign up to the licensing scheme. It was, he said, “effectively punishing good landlords for running their properties well”.

He went on: “If you saw the state of the properties that I see, run by the council, you would worry less about the private sector.”

Lib Peck laughed off Briggs’ claim that the worst rogue landlord in Lambeth is the council and brought the conversation back to licensing.

She agreed the council needed to put more money into the scheme and promised to work with the London mayor to produce a “name and shame” accreditation scheme.

He said: “Lambeth council did not prosecute a single rogue landlord last year. That needs to improve dramatically.”

But he rebuked Briggs for his claims about landlord licensing schemes, saying the extra layer of regulation was important because prosecutions can be difficult and lengthy.

There were further disagreements between the Labour and Tory candidates when Peck backed a community land trust (CLT) housing scheme on former Transport for London land in Streatham Hill.

Peck mentioned the council’s work with Brixton Green – which has been planning for years to build genuinely affordable housing in Brixton’s Somerleyton Road– as evidence of its commitment to CLTs.

But Briggs disputed the council’s dedication to this cause. He said Brixton Green had told him that Lambeth council no longer wanted to work with the organisation on its Somerleyton Road project.

Peck replied that she had agreed to revisit the proposal.

Aside from the contentious issue of landlord licensing, all the Lambeth Citizens manifesto suggestions were supported with gusto by the politicians.

They ranged from resettling 28 Syrian and Middle Eastern refugees, to challenging the Home Office’s £973 application fee for children to get British citizenship.

As well as their promises, the politicians all agreed to meet Lambeth Citizens quarterly and to work with the organisation to keep the community involved and Lambeth’s politicians accountable.

Keeping so many promises will be a big challenge for whoever is elected to represent the people of Lambeth this week.