The 21st of April is Record Store Day – an opportunity to celebrate independent music retailers across the country. Therefore it seems fitting to pay tribute this month not only to Brixton’s current crop of excellent record stores and street-side music vendors, but also to those who have shaped our community in years past.

We at the Bugle were very pleased to see Blacker Dread’s outstanding contribution to Brixton acknowledged in the recent film Being Blacker. For 25 years his shop was a refuge for anyone seeking great reggae music, good company and perhaps some sound advice. Other community-minded music lovers paved the way for Blacker. For three decades Red Records was Brixton’s main music Mecca, run for much of that time by Phillip Yapp. Despite the closure of the shop, Phillip still supplies a regular clientèle of Black music aficionados with choice cuts and rarities.

Brixton’s most celebrated record shop of the late 1960s and 70s was Desmond’s Hip City, which traded from the arch at 55 Atlantic Road. It was part of Jamaican entrepreneur Lee Gopthal’s Muzik City chain, and was under the stewardship of Desmond Bryan. A photo of the shop taken by Brixton’s acclaimed photographer Neil Kenlock is a poignant reminder of the challenges faced by Black-owned businesses at the time. On close inspection of the print, small shards of glass can been seen on top of the car parked in front of the shop. Mr. Kenlock told me that the photo was taken in the wake of an attack on the store by a supporter of the racist National Front. The car had been driven into the shop in an attempt to destroy the business, by then a much-loved hub for Brixton’s Caribbean community. 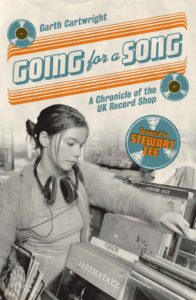 Former Brixton resident Garth Cartwright is the author of an excellent chronicle of record shops across the UK called Going For A Song. I arranged to meet him in Camberwell’s Rat Records to learn more about the story of Brixton’s shops. As well as Desmond’s Hip City, he told me, there was also Joe’s Record Centre which opened at 93 Granville Arcade in 1967. Joe Mansano arrived in the UK from Trinidad in 1962 and met the Jamaican entrepreneurs Len Dyke and Dudley Dryden who asked him to help run their record shop Dyke & Dryden in Tottenham.

Mansano was so successful that Island Records offered to set up a shop of his own in Brixton. Regulars at Joe’s Record Centre included Bob Marley, Bunny Lee and Lee Scratch Perry. In a move that was common at the time, the store owner decided to try his hand at music production. His debut album Brixton Cat, released on Trojan records in 1969, paid tribute to his adopted home.

Garth told me that Mansano increasingly found himself selling records to white music fans including the first wave of skinheads, and that Desmond’s Hip City also attracted music lovers from beyond the Caribbean community. One was the future bass player of The Clash Paul Simonon, who would meet his mates at the shop on Saturday mornings to soak up some rude boy anthems. But since his family didn’t own a record player, he never made any purchases.

Whether or not you own a record player, why not follow in Simonon’s footsteps and take a browse around your local record shops. Try Supertone Records on Acre Lane; Music in Ferndale Road, run by Claudia Wilson of Pure Vinyl fame; Container Records in Pop Brixton; Lion Vibes in Brixton Village; Ticketmaster and Universal Roots Records – both in the Reliance Arcade, or one of the specialist street-side vendors in Atlantic Road. Most stock a range of formats and music merchandise and all offer the chance for a friendly chat and some top music tips.