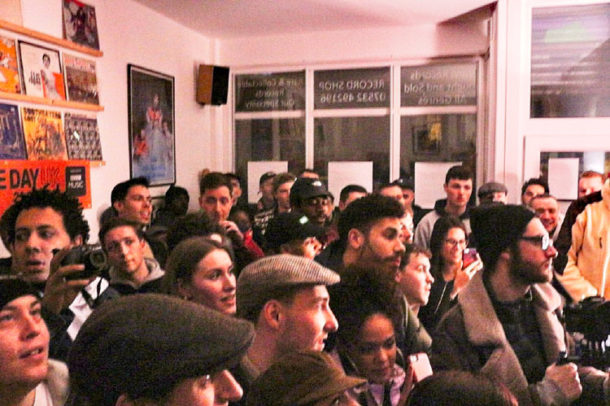 It’s been over a decade since Skinnyman and one of hip hop’s most influential rappers, KRS One, came together to record alongside other UK acts, MCD and Paradise, at Brixton’s The Dairy studios on Tunstall Road.

Once again Skinnyman returned to Brixton last night (23 March) for another unlikely meeting of minds at the newly opened record shop Soul Proprietors on Elm Park, Brixton Hill. An unlikely line-up, including Cosmo Pyke and DJ Oneman, brought an eclectic blend of sounds.

Since opening the record shop, it has been host to a handful of relatively small nights, including jazz group Ill Considered, and some soul nights by local musician Chrisèe. Nick Lucas, the owner of Soul Proprietors, says most of the nights held at the shop so far have been low key. He was interested to see what Friday would bring.

And, by stark comparison, Friday night was heaving with people; the storage room had been cleared and the garden made available to make room for a huge turnout.

Before Skinnyman’s performance, I asked about his first visit to Soul Proprietors. he described seeing his own records among the collection of vinyls …

“The first time that I visited this record shop, I was so surprised to see they had vinyl copies of my album – which is like a rare thing for me to see nowadays. I almost felt like the TV commercial of Fly Fishing by JR Hartley” – a reference to the 1983 Yellow Pages TV advert in which a man looking for a book called Fly Fishing is revealed to be JR Hartley looking for a copy of his own book.

“It was nostalgic to see someone still have my albums and I was asked to sign them … And I thought what a blessed vibes that this shop has, a lovely aura.”

I went on to ask about his collaboration with KRS One and about his other experiences in Brixton that shaped him musically.

“That experience was delightful,” said Skinnyman. “It was brought together by 57th dynasty. The guy behind them is called Charlie Parker.”

He then recalled seeing Run DMC and LL Cool J at Brixton Academy when he was 10 years old.

“So that’s going back about 33 years now. When The Voice newspaper first ever started, I was part of the Coldharbour Lane crew so, they had like a comic book strip- like a photo strip, of us in, and that’s when I was about 10-11.”

Shortly after our chat, Skinnyman went on to deliver an energetic performance. The crowds reciprocal energy caused a wire to come loose mid performance at which point Skinnyman jumped onto the table and delivered an acapella, freestyle.

Skinnyman’s parting words on the history of hip hop: “For as long as language has been mastered, lyrical pugilism has been used as a sort of entertainment, as well as a battle of the wits.”