Local resident Jemima Hartshorn, founder of Mums for Lungs, explains why she joined others to block Brixton Road last month. 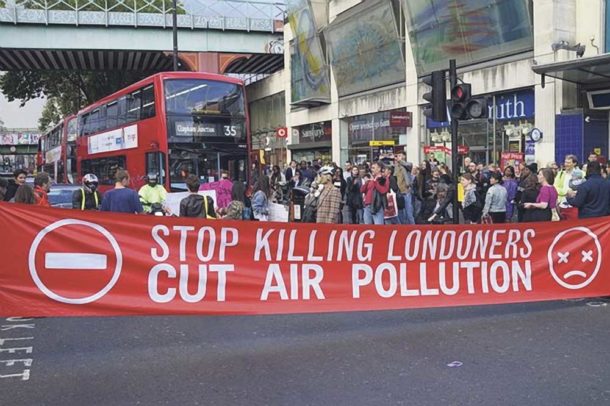 First of all, I would like to say sorry to anyone who was trying to get home on Brixton Road at 6pm on Thursday, 14 September. As part of a group who closed the road for a few minutes to raise awareness of air pollution, we knew that we would not endear ourselves to all commuters.

Still, I was shaken when a woman came up to shout at us that we were stopping her from getting home to her children. Maybe it was the wrong thing to do. But many of us also use the Brixton Road regularly – taking our children to school or childcare – and we are desperate to do something about it. That’s what motivated me to set up the campaign group Mums for Lungs, and why we joined with Stop Killing Londoners to hold a Road Block Disco outside Brixton Underground Station.

If you walk or cycle down Brixton Road, you will know that the pollution is noticeable. One parent at the event told me that she could smell it when she opened the windows at home. This is not just one of the most polluted roads in London, it’s one of the most polluted roads in Europe, having reached the legal annual limit of toxic nitrogen dioxide within the first five days of 2017.

And that pollution is deadly: 9,500 Londoners die prematurely each year because of it. It is affecting children and their growing lungs the most, with children growing up in polluted areas like Brixton developing asthma and stunted cognitive development. Studies show that their lungs are 10 per cent smaller than those of children who grow up in areas with cleaner air. Yet the government is doing nothing. 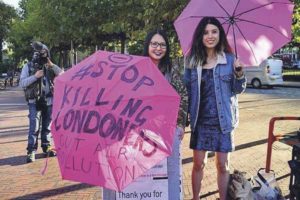 Environment secretary Michael Gove recently unveiled a plan to tackle the issue, after the Conservatives were ordered by a court to improve their weak initial proposals. But while some of this sounded radical – banning diesel and petrol cars by 2040, for example – it will do nothing to help Londoners for 23 years. There was no offer to pay drivers to replace the diesel cars that they were encouraged to buy for environmental reasons (we now know that diesel creates the most harmful NOx, especially in traffic). And there was no legislation for clean air zones.

At a local level the Mayor of London Sadiq Khan’s target is to ensure safe pollution levels by 2030. That is far too late for our babies, who may suffer reduced lung capacity for life. His plan also extends well beyond his own term, with no guarantee that future mayors will implement it. If this was the responsibility of a private company, it would have been shut down.

Governments have known for years that traffic pollution is killing people and groups like Friends of the Earth, Greenpeace and Client Earth have been campaigning to get them to do more about it. Yet still they have not taken action. As citizens, we can write letters (and at Mums for Lungs we urge everyone who cares about this issue to email mayor@london.gov.uk to register their concerns).

We can vote for parties that take a stronger line. But, in the short term, none of these “obedient” methods will stop congestion on Brixton Road at peak times. Would we block the road again? It’s a valid point that stopping traffic increases pollution, and perhaps we didn’t win over many commuters on that September day. For these reasons, we will not be holding regular road block discos in Brixton.

To those who were inconvenienced, I can only say sorry again – and hope that you understand this was an action to raise awareness among all road users that driving in London kills Londoners. To get involved with Mums for Lungs, visit our Facebook page.