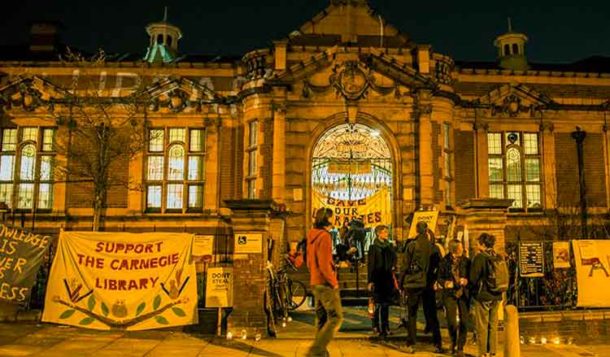 Library campaigners and local residents will stage a candle-lit procession to the closed Carnegie library in Herne Hill tonight (31 August), starting at 8.30pm at St Saviour’s Church, a few minutes from the library on Herne Hill Road.

They say that work to excavate the basement of the building to install a gym could begin at any minute and that Lambeth council could be paying up to £3 million for the conversion of the library, while its leisure provider GLL will get the gym for nothing.

The Carnegie Community Trust community group chosen by the council as its preferred option for a transfer of the building has also opposed the gym plan and warned that the council is ignoring their warnings in a rush to complete work on the building before next year’s local elections. 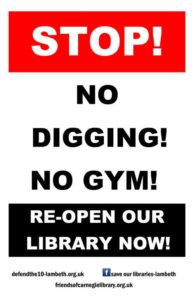 The Defend the Ten campaign, which is organising the procession, said: “Local residents are struggling to believe that the council still persists in a scheme that looks even worse than it did year ago.

“Council neglect has led to flooding within the building and the spread of pernicious Japanese knotweed in its garden. Staff and the Friends of Carnegie Library formerly ensured proper routine maintenance.

“Neither Lambeth council nor GLL have ever produced any feasibility study, business plan, financial rationale or market research to support the gym idea.

“Yet four local surveys have shown that local people don’t want a gym, and Lambeth council’s own physical activity strategy states that no more gyms are needed in the area.”

Lambeth council FAQs on its libraries

Haircuts and lager, courtesy of Lambeth