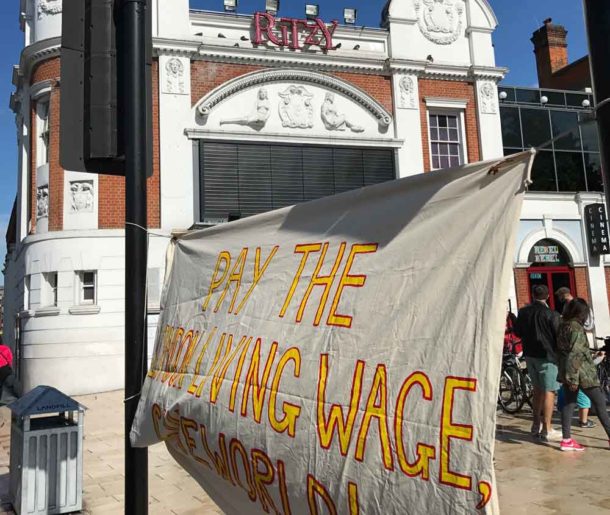 Workers at Brixton’s Ritzy cinema and others campaigning for the living wage at in the Picturehouse chain venues have defied attempts to “grind them down” and voted to continue their strike action.

The new votes for strike action – necessary under labour laws – came nearly a year after the current round of the long-running dispute got under way.

In less than 12 months the dispute, which began at the Ritzy, has escalated and expanded with union members at Picturehouse cinemas in East Dulwich, Brighton, central London, Crouch End, and Hackney joining the Brixton workers to demand improvements in terms and conditions with the Living Wage at the heart of them.

At the Ritzy, where the trade union BECTU has formal recognition, 77% of members took part in the August ballot which closed yesterday (29 August). Some 92% of members backed further strike action with 8% against.

A single ballot of members at the five other venues saw 61% of members taking part with 96% voting in favour of action.

Despite members at all the Picturehouse cinemas involved backing almost 60 strikes during the past 11 months, management is still refusing to negotiate with BECTU.

The union said active support from cinema-goers, local residents and leading figures in the creatives industries, who have all backed the strikers’ call for a boycott,  has helped to sustain members in their long campaign.

Alisdair Cairns, a representative at the Hackney Picturehouse speaking on behalf of BECTU’s Picturehouse reps, said: “Our campaign has lasted over a year now. The tactics employed by Picturehouse over that period have appeared to be deliberate attempts to grind us down and demoralise us.

“We’ve received countless threats from their lawyers, we’ve seen our friends and colleagues needlessly disciplined, and in some cases sacked, and we’ve still heard nothing with regards to resuming negotiations.

“These ballots show conclusively that the management’s strategy hasn’t worked, and that we are just as determined as ever to win the Living Wage and fair, reasonable working conditions. We call again on Picturehouse management to recognise their responsibilities to staff and to agree to talks with BECTU.”

The union and workers are still waiting for the outcome of an Employment Tribunal in Croydon on 10 August that considered Picturehouse’s decision to sack three BECTU representatives from the Ritzy in June.

Union representatives will meet soon to discuss the next steps in the campaign.

Film Africa kicks off at the Ritzy. We meet the Curator.

Take Two: ‘Brixton Village’ on ‘You and Yours’ and Open...