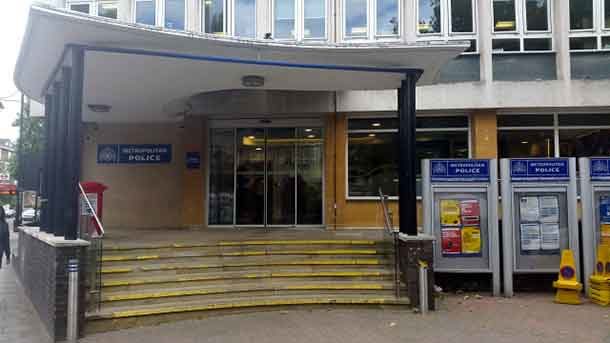 Brixton police station has London’s busiest front desk when it comes to reporting crime – yet only seven crimes are reported there on average each day.

Now London mayor Sadiq Khan has launched a major consultatation on closing many such front desks so that frontline police numbers can be maintained in the face of government funding cuts.

Since 2010, the Met has had to find £600 million of savings. A further £400m of savings must be found by 2020. On top of this, the government has not agreed to drop its proposed police funding formula, which could see the Met lose an estimated £174 million to £700 million extra every year.

That 37 per cent of Londoners would rather report crime online – with a 350% increase in online reporting since a pilot began in March.

The proposals would keep one 24-hour police front counter in each borough.

Khan said government cuts to the Met had left him with “no choice” but to take drastic action.

About 70% of crimes are reported on the phone. Three-quarters of those calls use the non-emergency 101 number.

A new online crime reporting service was launched for testing in March after Khan became mayor. He said it has resulted in a 350% rise in online reporting, with 1,200 reports a week made during its initial phase.

While Brixton may see only an average seven crimes a day reported, 20 front counters across the capital receive one or no daily reports.

The number of police front counters in London has dropped from 136 in 2013 to 73 today as the Met sold off “under-used” buildings to cut costs and raise money.

Under the mayor’s plans, each of London’s 629 wards will have two dedicated ward officers and one police community support officer by the end of this year. By next summer, it is intended that these officers will be using to up-to-date mobile technology to access and input information while on the beat that previously they could only input at a police station desk.

The officers will also be based at new, smaller hubs closer to the ward and the community they patrol.

In the coming months, the police will begin holding new community sessions to provide a more flexible and convenient way for Londoners to engage with local officers. These sessions will replace the system of contact points which have an average attendance of one or none.

Also planned are new methods to progress investigations online and by phone as well as more safer schools officers.