Music group Rudimental and some of Britain’s most popular YouTubers will be at Champion’s Hill this afternoon to take part in a community fundraiser for Football Beyond Borders (FBB).

Copa90 presenters David Vujanic and Poet will be among the YouTube stars playing in the Football Beyond Borders Community Cup. The event, which is being hosted by Ryman Premier club Dulwich Hamlet, aims to raise thousands of pounds in support of the South London based charity.

Football games will take place throughout the day today at Champion Hill. Events include a women’s showcase game at 4:00 pm in which an Oxbridge XI (comprised of female players from Universities of Cambridge and Oxford) will take on a London XI made up of players from Boiler Room Ladies FC & WonderKid Girls FC.

At 6:00 pm, an FBB All Stars team featuring Dulwich Hamlet legends will take on a team led by stars and friends of Copa90. 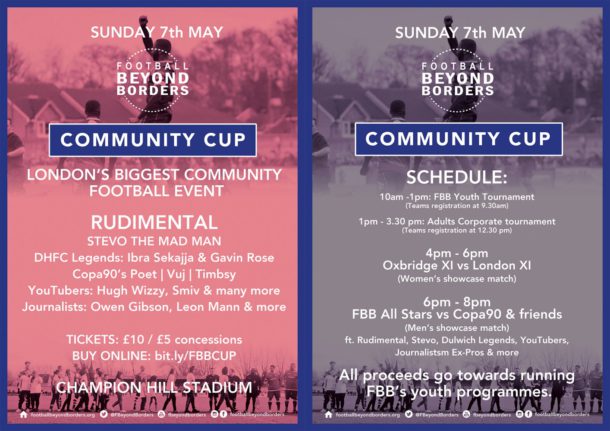 Football Beyond Borders, who run educational, sports and life skills training projects reaching young Londoners, hope to raise at least £20,000 to help keep their schools programmes up and running.

The charity says is at the risk of having to cut back weekly projects reaching more than 350 young people as a result of cuts and funding pressures on schools.

For tickets and details on the FBB Community Cup visit Dulwich Hamlet‘s web site and Football Beyond Borders.

Dulwich Hamlet held to a draw by Burgess Hill Town