Brixton Green, the community organisation that has for nine years campaigned for a new type of development in the area, appointed Mark Slowikowski as transition director for the Somerleyton Trust.

The first phase of the scheme, including the new theatre, needs to go ahead now because £3 million of Arts Council funding is time-limited.

It will include Carlton Mansions and its Nuclear Dawn mural, which will be preserved. It is hoped that work will start next spring with the theatre, which should complete in autumn 2019.

Lambeth council deputy leader Paul McGlone said: “This is an important step in our ambitions for Somerleyton Road.

“An assessment of how the council, Brixton Green and the community can achieve the next phase of this scheme is expected to end in the summer.

“Procurement for the next phase of the scheme is expected to be launched shortly after that assessment concludes.”

Dinah Roake, chair of Brixton Green, said it was pleased the first phase of the Somerleyton Road project was finally moving forward.

“Over nine years, we have been working to put Brixton people at the forefront of redeveloping this part of Brixton, making new homes and developing our streets to makes people’s lives better,” she said. 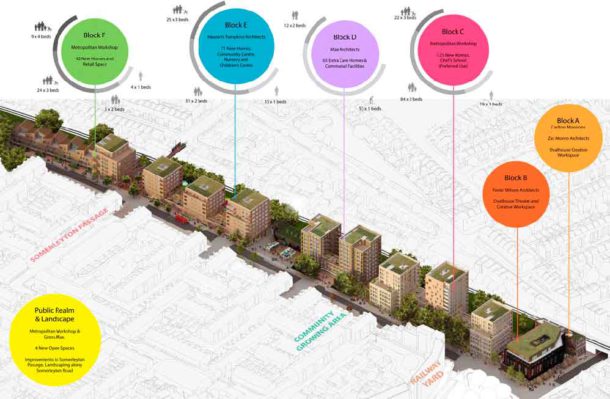 Architect Dinah Roake, chair of Brixton Green, has a long list of answers, but sums it up by saying that tenants of the new trust will be “paying rent to themselves”.

She, trustee Devon Thomas and Mark Slowikowski believe that the project is not only unique, but could also be a template for future housing development as the old system of owner occupiers and “social” housing provided by council and housing associations collapses.

All the 300 new homes the project is expected to create will be for rent and tenants will not be able to buy them.

The Brixton Green proposal is that tenants will pay rent based on their household income rather than either market, “affordable” or “social” rent. And there will be no ”poor doors” to keep social renters out of the sight of better-off tenants.

Dinah Roake says all the flats –ranging from one to four bedrooms – will be built to the same specifications and lower-rent properties will be distributed evenly around the development. It is intended that at least 50 per cent of the properties will be at “affordable” rent levels. The final proportion will depend on continuing financial planning.

Residents will have a say in the management of the development because the Somerleyton Trust will be established on co-operative principles and residents, all of whom will be members of the trust, will be represented at board level.

To pay for the development without involving private money, the Trust has been set up to lease from Lambeth council the land on which homes and business premises will be built.

The council will provide the money for construction through a loan from the Public Works Loan Board – an official statutory body.

When an individual buys a leasehold flat they pay the whole price of the lease on purchase and then pay ground rent.

But the Somerleyton Trust will pay an agreed sum to the council over the full term of the lease – providing a valuable income stream for the council once the loan has been repaid.

The repayments could be in the region of £4.5 million a year – a lot of money over a long period.

Dinah Roake says that this form of financing will enable the Trust to increase the proportion of social rented homes in the scheme after ten years or so.

She and her colleagues believe the council will get a better deal from them than from any alternative.

Devon Thomas stresses that this is not a “build and leave” project. “We’re trying to build new types of communities. This is a template for how new approaches to development can work.

“You’re not going to escape market conditions, but you have to try to bend them.”

The Trust’s tenants and other members of the local community are expected to be in charge and the plan is for an approach that involves a lot more than deciding on a stair-cleaning rota.

Which is where people like Mark Slowikowski, a housing professional for more than 35 years come in. His appointment and the development work for the creation of the Somerleyton Trust will be paid for in the set-up phase through a grant for social businesses, from Power to Change, funded by an endowment from the Big Lottery Fund in 2015.

A south Londoner – “Lewisham born and bred” – he has worked for local authorities and housing associations north and south of the river. At Islington and Shoreditch Housing Association, he was Head of Housing and worked with a development consortium of 11 medium to small housing associations – the North River Alliance.

He describes his new job as a “unique and wonderful opportunity”. When he saw the advertisement for the job, he says, “I thought: ‘This is something different’.”

But when, after a first round of interviews, he read the business plan for the Somerleyton Trust, he thought: “This blows everything else out of the water”. The plan had “rewritten the rulebook about how to make housing work”.

“If we can make this work,” he says, “this is the template for future housing in London and elsewhere.”

His one-year appointment is to get the trust off the ground. Another key job, in his words, will be to “take all the ideas and translate them onto something tangible and simple and understandable”.

Like any local venture, Brixton Green and the Somerleyton Trust have their critics.

Devon Thomas says that “some campaigners think they are defending a notional place, but have no clear idea of how they would bring an alternative into existence. We’ve got too many people saying: ‘I know what I don’t like and don’t want’, but who don’t have any positive solutions.

“Having a solution is what being an activist is all about.”