What happens when you are evicted from your Brixton shop of 11 years? Anna McKie finds out

Husband and wife Mohammed and Shahida Shafiq stand in their shop in Walworth, surrounded by metres of colourful fabric but, behind the swathes of African laces, cotton, muslin, satin and chiffon, they talk of the difficulty they have had getting here, and the uncertainty they still have for their future.

The couple ran S&S Textiles on Atlantic Road for 11 years, until September 2016 when Network Rail forced its tenants in the arches along Brixton Station Road and Atlantic Road to leave for what the company says are essential repairs.

The battle between the tenants and Network Rail has been running since February 2015, when shopkeepers were told they would be evicted to make way for refurbishment of the arches and they would be able to return, but with starkly increased rents.

“It was a shock when we first found out we would have to leave – and within the next six months,” Mohammed says, as Shahida tends to a customer. “This is our only business. It’s our lives.”

Tenants and supporters banded together and created Save Our Shops. A small victory meant that the deadline for eviction was pushed back until the latter half of 2016. 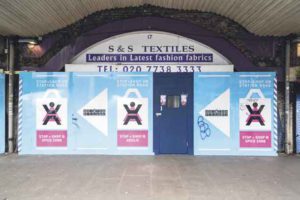 The council said it had “worked hard with Network Rail and tenants to reach an agreement on stepped rents making it more attractive for the 75% of businesses who want to return”.

From 19 September, leases were terminated and new ones will be drawn up that could eventually lead a triple increase in rents for the traders.

“They gave us compensation that covered us for a few months, which we desperately needed because what could we do?” Mohammed says. “We have all this stock, how could we find something else when we’ve got so much money invested in this?”

The couple decided to find other premises and, after six months, they opened, at the end of February this year. A fellow arches tenant helped them move in.  “He doesn’t know what’s next either, he’s waiting too,” Mohammed says.

The new premises are on East Street in Walworth, a bustling market in south London – but it’s not Brixton.

“We have told our old customers that we’re here,” Shahida says. “We went down to Atlantic Road today to put up posters on the boards covering our shops.”

“Some have popped by to say hello, but people from Brixton don’t come here to shop,” Mohammed says. “It’s as if we have had to start all over again. It costs a huge amount of money.”

“They have said that we can come back but to stepped rents that will eventually increase to three times what we paid before,” Mohammed explains.

The main problem, however, is that the unit that S&S Textiles inhabited will no longer exist – Network Rail’s plans show that it will be a pathway.

“Network Rail said we could have a unit around the back, but it’s not the same, and even that is not guaranteed,” Mohammed adds. “I’m not happy with what they’ve offered.”

Meanwhile, it’s a still a waiting game, as work is unlikely to be finished in a year, as was promised. “I know others tried to stay and fight,” Mohammed says. “But we couldn’t, we felt we had no choice but to leave when we were told.”

The couple say they support the need to fight, but needed to run their business.

“It has been so difficult. It has been two years of uncertainty,” Mohammed says.

“If this hadn’t happened, we’d still be there, we were very happy there. We had regular customers. We would have happily stayed at least another ten years.”

Are you an evicted tenant from the Brixton Arches who would like to tell their story? Email newsdesk@brixtonblog.com.