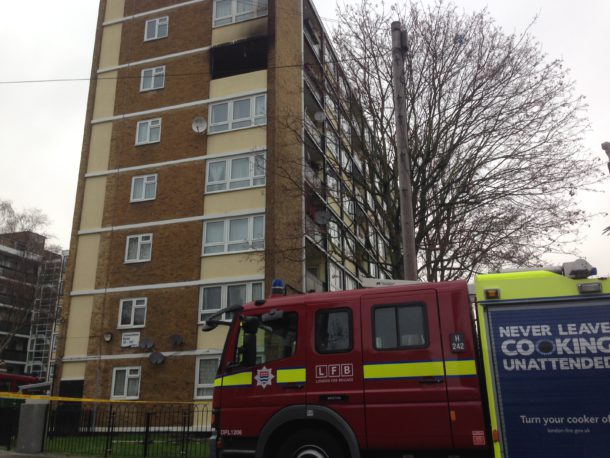 Firefighters rushed to save a Brixton resident’s New Year’s Eve today as flames tore through a flat near Effra Road, thankfully not resulting in any injuries.

Six fire engines were called to the block of flats on Crownstone Road, where a five-roomed flat on the fifth floor had erupted in flames, at around midday.

Half of the flat was damaged by the fire, and pictures from the scene showed blackened walls and windows. around the outside of the property. 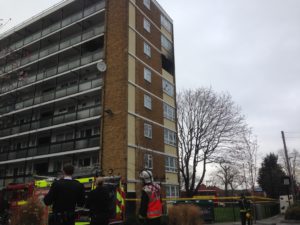 Fire crews soon brought the blaze under control, with the incident over within two hours of starting.

The cause of the fire is not currently known, but is under investigation by London Fire Brigade.

Brixton Station Manager Lee Sparks praised the work of his teams, and described the gravity of the situation.

“As I arrived on the scene flames were coming out of the side of the building.  Fire crews wearing breathing apparatus worked really hard to bring the fire under control quickly,” he said.

Relatives of the property’s occupants said the residents were too emotionally drained to comment on the blaze.

The incident was attended by fire crews from Brixton, Clapham, West Norwood, Peckham and Lambeth.

Lambeth police were also on the scene, and told drivers and residents in the area to expect disruption.

Locals were clearly alarmed by the scale of the blaze, with one Twitter user tweeting: “Big fire in flats on Effra Road, Brixton. Very bad.”