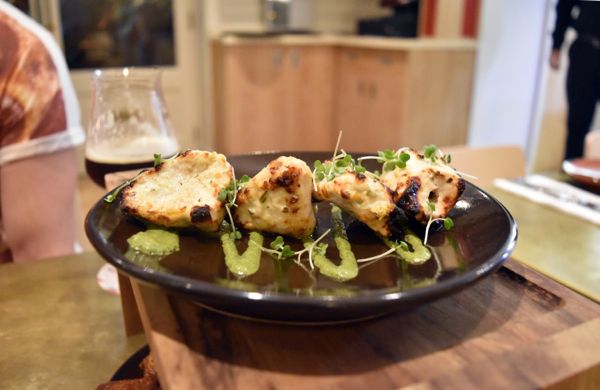 Fridays. They’re made for relaxing and unwinding, sharing tales of the week with friends and celebrating successes with a well earned drink. And what goes best with all that? Yep, Indian food. So, last Friday, I headed out to try Booma, the new partner in crime and neighbour of the Crown & Anchor pub on Brixton Road.

Booma serves northern Indian small plates and craft beer. The concept is to pair specific dishes with their suggested beer. Quite cleverly, in order to allow you to do that without getting shish faced, they sell their beers in one and two thirds of pints. The menu uses colour coded dots to show you which beer to order with your bhajis.

The space is simple and bright with an open-facing kitchen, wafting all those lovely smells from the smokey tandoor oven into the dining area. Enormous windows onto Brixton Road and across to the Crown & Anchor invite the evening in and punters can choose to sit at the bar seats by the window and watch the night go by.

Now, before we start on the food, let me just tell you about the Hush Heath cider (ABV 4.8%). According to the menu it is “made by celebrated winemakers” and has a Champagne-style secondary fermentation in a keg. I don’t know much about the chemistry of cider-making but I can translate that formula for you – marvellous.

Ignorance aside, it really did have the taste of a delicious and crisp white wine. I ordered one third, then another and I will leave you to guess at what happened next. Needless to say I didn’t get very far in the suggested method of trying lots of different beers from the list. But I did have a plus one who can vouch for the Booma Lager (ABV 4.5%) and the Oakham Green Devil IPA (ABV 6.0%), but not the Rodenbach Grand Cru (ABV 6/0%) as apparently that one tasted like balsamic vinegar mixed with maple syrup.

Every table is welcomed with a plate of poppadom crisps, covered with lashings of three different sauces (perhaps intentionally continuing their theme of trying more than one, in all situations?). Out of the three, the tamarind was the one which we fought over for the final mouthful.

The suggested dish to accompany my aforementioned cider is the achari paneer tikka. Oh, go on then. I love the combination of paneer (a fresh, unsalted white cheese made by curdling milk with lemon juice) with Indian spices. Booma’s is perfection with lovely tandoor-singed crispy corners and a warm, squidgy centre. My advice is to eat it quickly as it definitely starts to lose it’s charm quickly when it cools down.

One dish which really caught my eye was the malai tikka – chicken cooked with cream, cheese and rosemary. Rosemary isn’t a herb which is usually associated with Indian cooking and you’d normally be more likely to see this combination on a blackboard of a French bistro. But the tender, juicy and perfectly cooked pieces of chicken which arrived, fresh from the tandoor, made this seem totally normal. (See top photo)

The disappointment of the night was the tulsi seekh kebab which was weak and over-minced. I also find it a huge cop-out when a restaurant uses the same dressing for multiple dishes and in this case, the same mint sauce was on three out of five. It’s much more satisfying to think that each dressing has been carefully crafted for the dish it is accompanying so I’d urge the heads behind Booma to rethink this small but important detail. 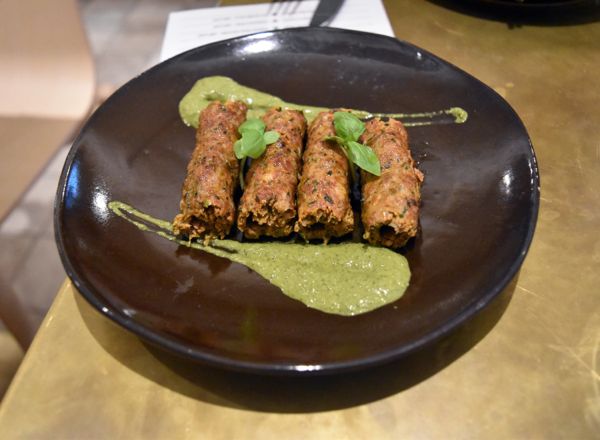 It’s not really a Friday-night Indian without a garlic naan and luckily at Booma, it comes wrapped around some mouth-watering pulled duck and spiced plum chutney. The duck kathi roll is an absolute must and I think Booma should seriously look into selling this at lunchtimes through the week as it would make the perfect brown-paper-wrapped, grab-and-go sandwich alternative for workers. They are open from 12pm on weekends so there’s potential for a Saturday lunchtime hangover cure or a lazy Sunday alternative. 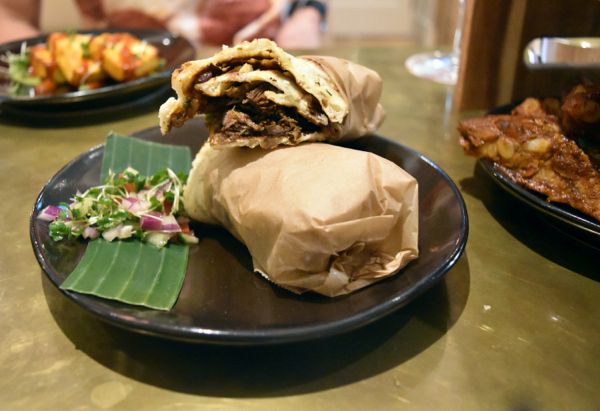 All the dishes we’d received so far were delicate and dainty. So imagine our surprise when a mountain of giant chettinaad (south Indian spiced) pork ribs was placed on the table. This was seriously gnarly and looked like something Tarzan would order. And Tarzan would have been happy. We were happy. These ribs are brilliant. The slow cooked meat is succulent and falls right off the bone and what’s more, these ribs also had a great heat to them. 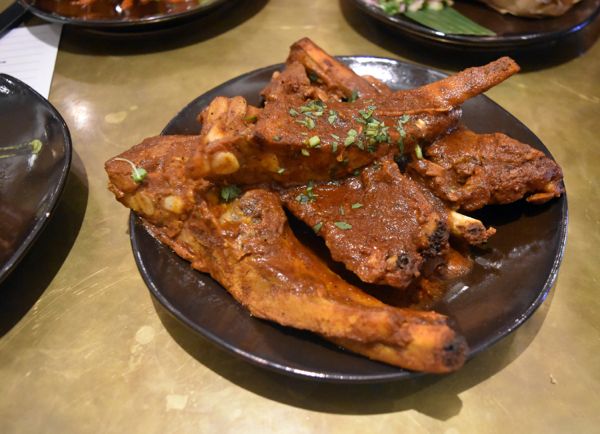 Prices range from £4.50 to £10 per dish and five plates between two of us did the job nicely. I think Booma would particularly come into its own if there was a group of four, at which point you could legitimately ask for one of everything from the 14-item menu. Sure, there are things they could work on, but Booma has something unique to offer and really does make for a great Friday night with friends.