Block 336 plays host this month to Jennet Thomas’s The Unspeakable Freedom Device – a surreal multimedia exploration of a primitive future world populated by a cast of strange and yet familiar characters. It runs until 21 October.

The work was originally commissioned by Blackpool’s Grundy Art Gallery in 2015 and immediately ran into a political storm that saw it banned until after the general election.

Politicians baulked at the portrayal of Margaret Thatcher as the spectral protagonist. She appears as an all-pervasive image burnt into the collective memory of a culture that is both sinister and psychedelic.

The main characters, Glenda and Mary, wander through a red, green and blue broken landscape. Signposts have collapsed and they must decide which route to take. All roads seem to lead to Bluepool. 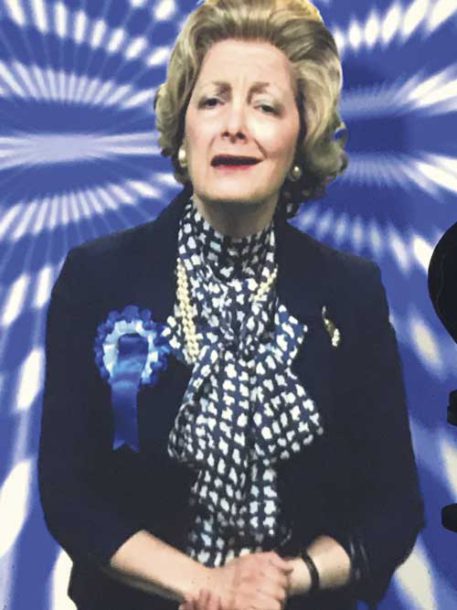 The artist, Jennet Thomas, is senior lecturer in fine art at Wimbledon College of Art and follows in the tradition of experimental narrative video.

She says that the idea formed after seeing the funeral procession for Thatcher which she found quite bizarre. Blackpool seemed a fitting setting given that the Winter Gardens played host to many of her major speeches to the Tory Party conference.

The central device is the idea of a pilgrimage, a journey that involves playing with colours. Red, green and blue are political party colours as well as the components of digital screen images.

Thomas plays with this and our relationship with our technology and devices in the film. “It’s complicated and quite troubling, it knows about us. I was interested in playing with that – particularly virtual reality.”

Thomas added: “The work got banned because the Grundy Gallery runs along the fault line that is the boundary of two constituencies. The gallery was accused of political bias and delayed the opening until after the general election.”

The other piece in the exhibition by Thomas, Animal Condensed> Animal Expanded, according to the programme, “is the first of a trilogy that explores the meaning of animals in a post-digital and anthropological world”. Enough said, best you see it for yourself.

Opening hours are Thursday to Sat, 2 to 6pm, until 21 October.

There’s a performance evening on 7 October, 6.30–8.30pm, when Block 336 will stage I Am Your Error Message, a live-video performance by Jennet Thomas and Red and Blue by the musician Leo Chadburn.