The Carnegie Community Trust (CCT), one of two organisations bidding to take over the Carnegie library in Herne Hill, has said it cannot support plans for the library’s conversion by Lambeth council and its leisure provider GLL.

The trust, which has received council funding and has former councillors as trustees, has been criticised as unrepresentative by a rival group, the Carnegie Library Association, a charitable incorporated organisation, which is associated with the high-profile campaign against Lambeth’s plans for its libraries.

CCT says an exhibition of future plans for the Carnegie library mounted last month by the council and GLL (now known as “Better”) was visited several time by its trustees.

They say that the whole building must be assessed and replanned as a single project and warned that “piecemeal, disjointed attempts at putting in new uses will fail to meet the overall needs of the building”, and would cut across vital spaces and services.

“Carnegie is a symbol of community pride which will remain primarily a public resource, with a library service and other community uses at its heart,” it said.

CCT pointed out that it is “widely known” that a public consultation it carried out in 2014 rejected the inclusion of a gym in the building – an integral part of the council-GLL plans.

CCT said the council had backed its application for a £1m National Lottery grant to develop its “extensive and exciting plans” for the building.

The council has already paid architects Butler Hegarty for work on these plans.

But, said the trust, GLL and Lambeth council had not engaged with it to look at the Butler Hegarty plans, nor to consult it and the community about the purposes and plans for the building.

The trust said that “despite repeated, recorded requests by CCT, neither GLL nor Lambeth council asked to see the BHA plans when preparing for the exhibition”.

Its was “mystified by a conflicting and hurried proposal to develop one part of the building in isolation, and would urge the council and GLL to engage with us as soon as possible to enable a sensible and truly responsive discussion.”

The trust said it was “irresponsible” for the council and GLL not to consider BHA plans for accessibility.

CCT said members of the community visiting the exhibition were confused about the community spaces shown as potentially available on the ground floor.

“It is evident to all that the main room, gallery and former children’s library cannot all be used as library in the future, but the plans gave no indication of this, in fact, the contrary.”

The trust said that the absence of any provision for a kitchen in the short-term council-GLL plans meant income-generating activity would be impossible.

CCT said there was “a pressing demand” from the community to reopen the building as soon as possible, for new uses and community uses which have currently been dispossessed.

“As it is likely to take many months for GLL to achieve planning permission and if approved, to carry out the building work to convert the basement to a gym, it is critical to the confidence of the community that interim plans are made for use of the ground floor and first floor.”

CCT said that the building had urgent repair needs, but “there is no suggestion in GLL’s exhibition that they have taken into account the physical state of the whole building”.

The trust “strongly advised” that GLL’s plans be revisited “as a matter of urgency” before any party proceeds with the planning process.

“As potential owner of Carnegie Library following asset transfer, we look forward to an invitation to discuss comprehensive planning for the future of this building.

“As these plans were offered at the exhibition we would not be able to support them at formal planning consultation stage.”

CCT is calling for new trustees to come forward. 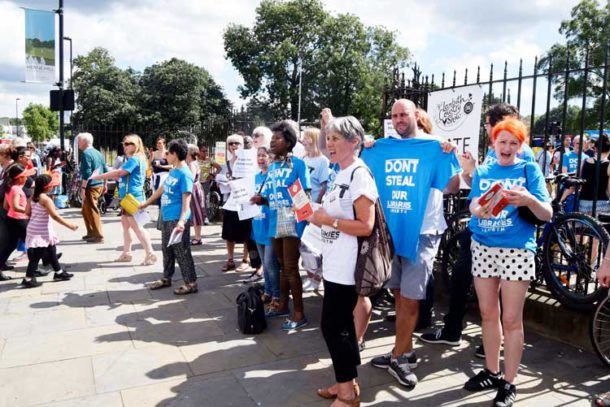 Rival library campaigners leafletted visitors to the Lambeth Country Show at the weekend.