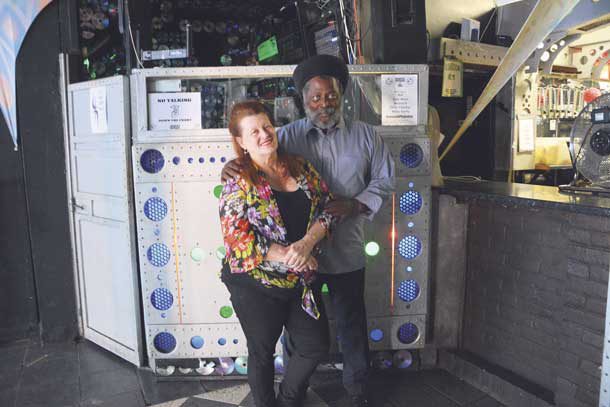 A successful Brixton business, started with a grant from Lambeth council more than 30 years ago, faces closure if a planning decision that was stopped by the High Court is reinstated.

Louise Barron and Tony Pommell, the owners of Club 414 on Coldharbour Lane, took the council to court earlier this year and won their case.

A property company that is part of a conglomerate that owns large parts of Brixton wants to convert the club, which has been operating for 31 years, into a shop and flats.

The two owners (above) who turned the club into a world renowned venue – one 72-year old commutes monthly from Thailand to visit one of its music nights – say they “just do not understand” why the plans are not opposed by Lambeth.

Louise and Tony are angry that their long years of work in what were then very hard times in Brixton seem to count for nothing.

“We’re doing what we were encouraged to do all along – create a business and employment and bring money into Brixton,” says Tony.

“We created this night-time economy they are now so proud of. For many, many years, nobody – except us – would open after 11 o’clock at night.”

But, “now Brixton is nice and trendy,” says Tony, the freeholders who own the building that houses the club “want to kick us out and earn more money”.

Tony says he is “disappointed in the way Lambeth has not backed us. We are their own,” he says. “They gave us £5,200 to start this business.

“I could have been on the dole – which I was at the time. I wanted to start my own business and was able to do that via Lambeth.”

“I’m disappointed Lambeth are assisting these millionaire freeholders against a business that they helped to start.”

Both Louise and Tony will be 60 before long and had been looking forward to another 10 years at the club before retiring. Now they feel that: “It’s all about money. It’s not about jobs. It’s not about the community.

“We’re being kicked out so that others can take advantage of what we have created. No compensation. No nothing. Just: ‘Get out!’.”

Businesses in the Network Rail arches on Atlantic Road closed last month as refurbishment began after a controversial planning decision by the council.

Brixton on the BBC