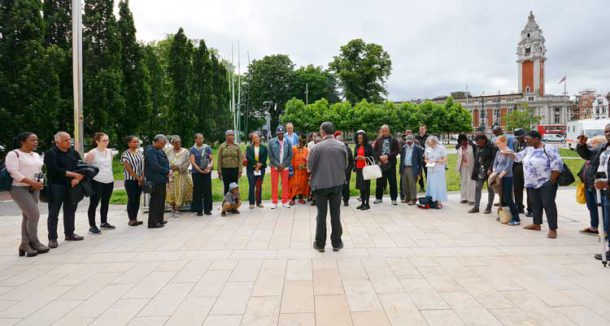 The annual two-minute silence to remember the Windrush generation was held in the square named after them outside the Black Cultural Archives this afternoon.

Windrush Pioneers such as Sam King, co-founder of the Windrush Foundation, who passed away peacefully in his sleep on  June 17 at the age of 90 in Brixton, were commemorated, along with women and men from the different migrant communities who gave their lives and made a contribution in two world wars. Rev Kumar Rajagopalan gave an address before the silence was observed.

The event also recognised the achievements of black and minority ethnic communities in the reconstruction of Britain after WW2 in key roles in the public sector, NHS, industry, faith, business, construction and  public life generally.

Alexander D Great told their stories in a calypso.