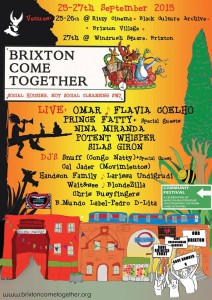 Brixton Come Together Festival is returning for a weekend of music, film, activism, photography, literature and gastronomy.

The festival, now in its fourth year, will take place this weekend September 25 to 27.

This year’s theme is “Social Housing, not Social Cleansing”.

The independent festival will feature community stalls that aim to connect, promote and support local struggles/campaigns; focussing on the rapid gentrification of the area – which prompted the birth of the Reclaim Brixton movement back in April.

The event will be held at the Black Cultural Archives, the Ritzy Cinema, Brixton Village and Windrush Square.

There is a full program of live music, DJ’s, workshops, talks, films, healing, yoga and Brazilian carnival. Performers include Omar, Nina Mirand and Potent Whisper.
There will also be a new children’s area with a Selva interactive performance, a circus and theatre fusion.The full list of musicians, artists, speakers and performers, from Brixton to Brazil, will be announced soon.For more information or to get involved email: cometogetherbrixton@gmail.com or visit Brixton Come Together’s Twitter and Facebook pages.