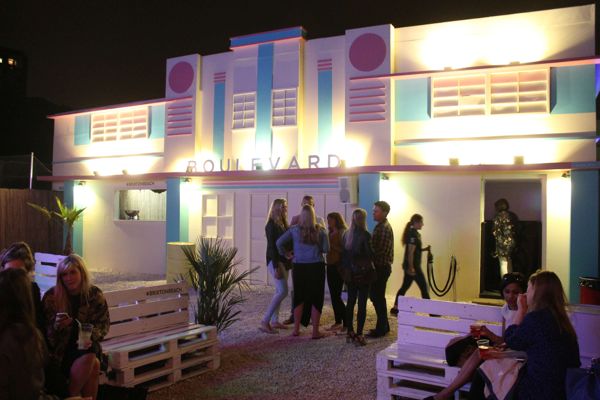 It’s the sequel Brixton wasn’t exactly begging for: last Christmas here at Brixton Blog we were a little rude about South Pole Saloon, the Christmas night market venue that suffered from overpriced drinks, faintly cringe worthy ‘sexy’ entertainment, not-exactly-surprising cold weather, and a clientele that seemed to have been bused straight in from Clapham High Street. Brixton Beach Boulevard has now popped up in the same location and from the same company, and if nothing else, logic suggests it should fare slightly better in the weather stakes at least.

With all its rooftop cinemas and rooftop hipster bars and rooftop crazy golf courses, Londoners have clearly shown an innate desire to climb on top of the nearest building as soon as the temperature rises above 16°c. Brixton Beach Boulevard is also showing all those football matches this summer too –set to be a lucrative moneymaking prospect right up until England get knocked out as soon as they come up against their first decent opposition of the competion (as they always do.) Still, add all this together and Brixton Beach Boulevard does sound altogether more like a business model starting out on a much surer footing than its festive cousin.

They’ve made some improvements, too. The actual place is a decent environment in which to spend a summer’s evening – “oh I wasn’t actually expecting sand”, as my friend said as soon as we arrived. The benches and deckchairs seem to encourage very ‘un-Londony’ random conversations between strangers. And those drinks prices – which started at £5.40 a pint last time round – have been reined in to a less rage-inducing £4.40 for your entry level pint of Kronenberg. Sure, the bar service tends to be apocalyptically slow, and the staff more resemble 2008 Colchester than 1980s Miami, but it’s still a positive start.

Last year at South Pole Saloon they had much-publicised ‘immersive performers’ roaming the venue strutting along the bar and making up songs on guitar for groups of girls and such like. This year we spot two guys dressed as Miami cops, and eavesdrop a couple of their conversations. One of them says to a female customer “so who’s this guy?”. The customer responds “my boyfriend”, and the ‘police officer’ just immediately walks off. It’s quite a funny moment, shortly followed by a different customer saying to their friend “…I used it earlier to take cocaine”. The Miami cop was nearby, and interjected “do you have any cocaine? …can I have some?”. At this point it’s not exactly clear whether these officers represent a continuation of the immersive performers previously employed by this organisation, or are just a typical pair of customers in fancy dress that have drifted over from Clapham. 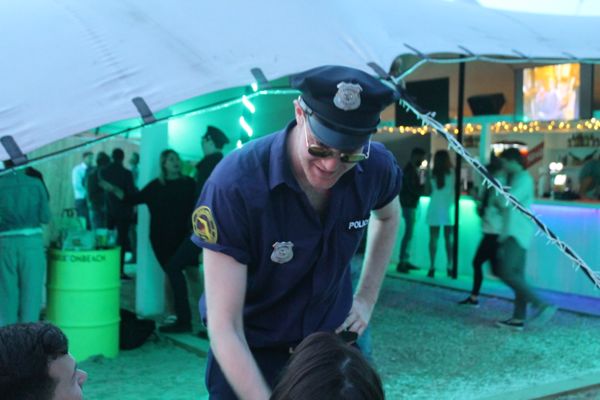 The food stalls hover roughly around those same price points you’ve been bludgeoned into believing are acceptable in London, since Radio 2 audiences started hearing that street food markets are the cool places to hang out nowadays. Here at the Boulevard, a Cuban sandwich (under-salted, not really enough going on, flavour-wise) from Miami Bass underwhelms.

Fair play to The Other Side, who offer two of their chicken burgers to us for £10 (and this is despite Brixton Blog reviewing venues anonymously, unlike all your freebie-chasing foodie Instagramers out there). Their chicken is brilliantly, almost excessively crunchy. Of the two burgers, the Honey Butter Bun adds nothing else of interest to the mix, but with buffalo hot sauce, blue cheese yogurt, coleslaw and pickles competing for attention in the Buffalo Bun, you’ve got a burger worth showing up at the venue for alone. 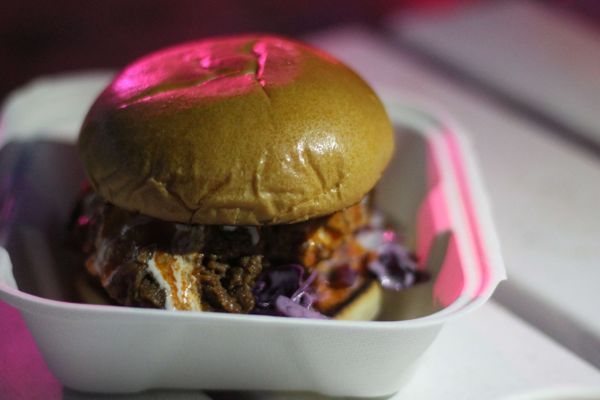 Here’s an extra tip then: if you’re heading to the Boulevard try showing up either on Thursdays, Sundays, Friday before 7pm or Saturday before 4pm. For one, that’s when you’ll get in for free, and our visits seem to suggest that everybody there will be far more likeable. You’d have to say BBB is a better option for summer outdoor drinking than the (already good fun) Prince of Wales rooftop bar –surely its main ideological rival. For our money, we’d still probably rather spend an evening at Pop Brixton, but we’d also have no problem if Brixton Beach Boulevard became an annual thing.