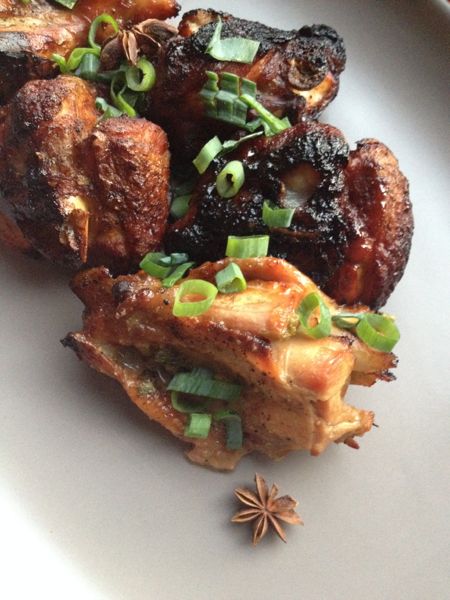 As soon as the evenings get longer and there’s that promise of summer in the air, I always intend to get the barbecue out and make the most of it. But the last twice I tried, it rained after I’d lit it and I still stress that I’m either going to accidentally poison everyone with undercooked meat or bore them with veggie sausages.

So instead I wanted a recipe that summed up the best of the barbecue feel with the minimum of effort or charcoal and wasn’t dependent on the weather but could be eaten outdoors if you’re hardy.

Chicken wings are like a religion in South London, but I wanted to give some praise to the lesser known but even better value turkey wings you see in butchers round here. I get mine at Dombey’s in Market Row or Brixton Foods in Electric Avenue and asked them to cut each wing into 4 pieces for ease of cooking because a whole turkey wing is huge. Enough to feed 4 people cost me about £3.

And speaking of easy they then get their sticky barbecue inspiration from being cooked in sarsaparilla cordial and seasonings in the oven before being perfect eaten with your fingers in front of Saturday night telly or even a Sunday picnic. You won’t be waiting til Christmas to eat turkey again after these!

Start by preheating your oven to 180C and preparing your dish for roasting the wings.

If you’re using a metal roasting tin for the wings, line with greaseproof paper to make it easier to clean afterwards. If you’re using Pyrex or a ceramic dish, lightly oil it instead.

Season the wings well with salt and pepper and then fry them four at a time in a hot dry frying pan for 2 minutes each side. This makes the skin crispier and allows the flavourings you are adding to stick to it all better rather than slide off to the bottom of the dish.

Put the first batch of wings in the dish you’ve prepared and repeat with the second. Make a rough paste with the chopped spring onions mixed with the ginger, lemon juice, paprika and five spice powder and spread it over the wings as best you can.

Season again with salt and pepper and pour the sarsaparilla cordial and cold water gently over it all, making sure you don’t wash the paste off again. You could use a 330ml can of root beer, Dr Pepper or cola instead. But don’t use diet here. You need the sugar to get the right finish.

Pop the dish in the oven for an hour. Check them after 30 minutes, adding a small amount more water if it’s starting to catch round the edges or burn and turn the wings once before cooking another 30 minutes. Allow the wings to cool for five minutes and serve.

We ate them sprinkled with a little hot sauce with rice and a crunchy slaw of grated sweet potato, red cabbage and radishes dressed in a little yoghurt on the side. They’d be excellent with some oven roasted corn on the cob too when it’s in season. All the barbecue fun without any of the hassle.

MEETING: Get involved with the Brixton Blog and Bugle