Youthsayers is a new Arts Council funded project to support young musicians, spearheaded by Brixton afro dub band Soothsayers and local music charity Raw Material. We caught up with Robin Hopcraft and Idris Rahman from Soothsayers to find out more.

The team behind Youthsayers are calling on all interested young musicians to take part in free workshops where they can jam with like-minded musical folk and learn more about making music as a band. The aim of the project is to construct a performing group of young musicians aged between 11 and 18. “It’s about learning how to run a band in a social way, and also how to direct a band in practical sense,” says Robin, who is a trumpeter himself.

Running the sessions are Robin, Idris and other members from reggae and afrobeat band Soothsayers, an internationally recognised group based in Lambeth whose members have played with everyone from Adele to The Specials. They’ve also played Tuesday nights at the Effra Hall Tavern for over a decade.

The Youthsayers project will provide budding musicians with a chance to gain experience of working in a band alongside professional musicians playing afrobeat, funk, dub and jazz. They’re open sessions – as long as you’re a Lambeth musician with a little bit of experience with an instrument you’re welcome to attend. 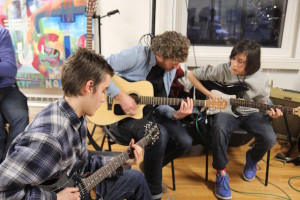 “We can accommodate most instruments,” says Robin, “an alpenhorn might be tricky though. A bugle might be tricky too, as you can only play certain notes.” If you’re thinking of going along, or suggesting it to someone who should, it’s worth noting that if you play wind or brass you need to take your own instrument.

There’s also the chance to gain Arts Awards that credit towards entry into higher education.

It can be hard to get support for music in schools now – there are orchestras, but they only encourage a certain type of music and performance. “If you’re in an orchestra you can’t perform in a pub with your mates,” says Robin. Youthsayers is about the social side of music too.

Being a young musician is certainly not easy, so what tips do seasoned professional artists Idris and Robin have for people just starting out? “Concentrate on the music and stay focused,” advises Idris. Robin insists it’s all about having your own voice: “be creative – write your own music.”

Get involved in Youthsayers by heading to www.youthsayers.net or taking part in their next open workshop at Hideaway in Streatham on Saturday 16 April.

Skunk Anansie’s Skin calls for arts for all