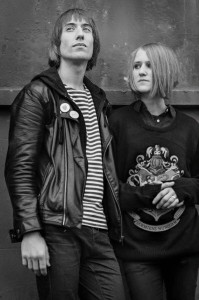 “You get to feel the audience’s reaction and they’re part of the gig and the sound” says Tommy, the duo’s guitarist and singer. “I began busking in Brixton before I met Mary and the audience is mental compared to anywhere else in London.”

But Lambeth Council are unfortunately not part of the supportive and “mental” audience, threatening the duo with court action if they busk again outside Iceland on Brixton Road. “We last played a month ago to our best audience. Brixton doesn’t earn us that much money but it’s coming home” says Mary, the duo’s bleach-blonde Belarusian drummer.

With wide-ranging influences from dubstep to The Clash, The Strokes and Brixton’s own David Bowie, their musical ambitions are modest and unpretentious. “I just want to write something that’s catchy and real, that’s easy to relate to rather than being too poetic,” Tommy tells me, shrugging without concern as we chat about that the need to grab people’s attention in a few bars as a busking band. 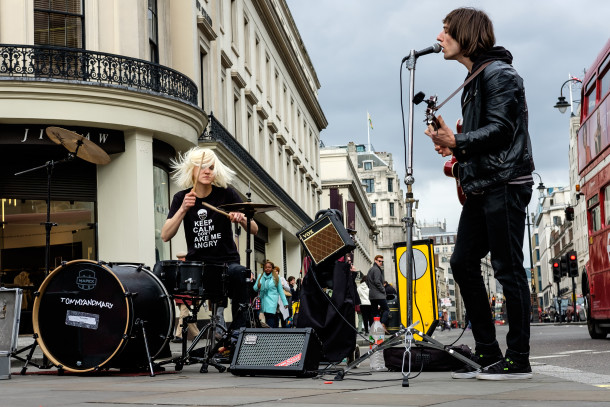 Tourists are a great audience and regularly start singing along to their songs as they perform. Tommy and Mary stick to their original songs, despite constant requests to play Oasis’s Wonderwall and other well-known songs. “We didn’t write all these songs just so that we could stand on Oxford Circus and play fucking Adele!” Tommy laughs.

“Tommy writes the guitar and lyrics and I write the drums,” Mary telle me, but the two are constantly re-working their music collaboratively, preferring to live on a shoestring and support themselves through their music alone. “If we had day jobs we wouldn’t get to actually work on our music.” With so much of their lyrical direction springing from a hatred of a system which ties citizens into relentless and unrewarding patterns of work and wages, they are living London life in the style which fulfills them but they “don’t eat a lot”.

The duo were married two years ago at Lambeth Town Hall. Self-styled through and through, their vows had an added artistic dimension. “Our marriage was based on a promise that we would never play music with anyone else.” Although this added layer of fidelity did give Tommy a sleepless night or two, he proudly confirms that he came to his senses – “this is my dream, to be married to someone who I love and make music with them everyday. Why not go for it?”. Now the pair are inseparable.

“Playing in Brixton actually just got us our biggest gig,” says Mary. They were approached by a member of their audience who had seen them play in the same spot several times and invited them to open The Secret Garden Party this July.

The pair were also approached to have a documentary made about them by French filmmaker Luis Murrighile, as part of his series which takes the viewer through ‘24 hours with’ musicians. Brilliant subject matter for the brief, Tommy and Mary’s featured 24 hours is packed with journeys, gigs and different audiences, including bundling a full drum kit on and off the bus.

Looking forward to their first festival, the release of the 24 Hours with Tommy and Mary documentary as well as plenty more busking, Tommy and Mary are currently working on their second album.