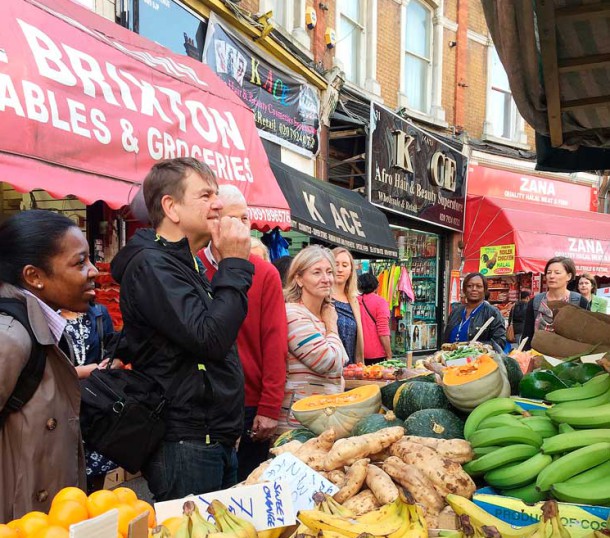 Improvements for Electric Avenue costing more than £1 million have begun.

Street layout and water and electricity supplies will be improved, with £869k from the Mayor of London’s High Street fund and £390k from Lambeth council.

New street traders’ “gazebo” stalls will be provided for Electric Avenue, which will also get improved street lighting.

Improved rubbish collection is promised as well as public WiFi and a secure cashless payment system for all licensed Brixton street traders.

Some traders who had initially welcomed the plan now have worries about its impact on their business.

They include the impact pedestrianisation will have on getting vans in to set up and the suitability and size of the gazebos.

Stuart Horwood, CEO of the market traders’ federation (above), told the Bugle that pedestrianisation remains a bone of contention.

Cllr Jack Hopkins, Lambeth cabinet member for jobs and growth, is to lead a series of meetings to look at the issue.

Residents had identified noise when the market is being set up as a problem.

Horwood said: “The gazebos were intended to be a solution as they are quick to set up, safer and quieter and should help address residents’ concerns. But I understand they are not wanted by all the traders.”

A meeting is due with the project manager for the regeneration of Brixton Market, to try to resolve the gazebo issue.

Cllr Hopkins said: “The current works represent a much-needed £1m boost to the Electric Avenue street market. Many traders told us trade was down and shoppers have said they want a less congested and more attractive place to shop. We know there will be disruption but we’ve worked with traders to find alternative pitches nearby and think the long-term prize of a thriving iconic street market is worth it.”

Stockwell Good Neighbours are holding a sponsored walk on Monday