Twenty small businesses who have been barred from their offices in the Carnegie library have accused Lambeth council of behaving shamefully and threatening their livelihoods.

One business was prevented from running workshops for parents and children at Great Ormond Street children’s hospital by the continued closure of offices in the library.

The business owners say the council has refused to offer or find them alternative accommodation.

But a spokesman for the council said it was committed to supporting and developing local businesses and that such accommodation had been offered.

“In the case of Carnegie, we’re sorry that the access for businesses to their premises was impacted by the occupation relating to the library,” he said.

He said the council had been in regular discussions with London Arts Base Ltd as the landlord – LAB operates the tenancies on behalf of the council – and had offered alternative accommodation for all the businesses involved, “which we have been advised that they do not wish to take up”.

The Blog understands that some of the accommodation offered was in Impact Hub in Pop Brixton.

The spokesman said the offer of alternative accommodation remained for those businesses to take up should they wish. “We have had some interest, which is being progressed,” he said.

“We have also offered to meet all the businesses affected directly and give them access to their belongings in Carnegie.” 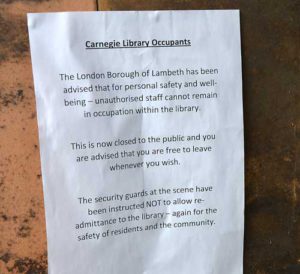 The businesses were barred by the council from entering spaces they rent when the library in Herne Hill was occupied by protesters against its closure.

After the occupation finished on Saturday 9 April, the offices remained closed. Last week the small business owners were told that, despite the occupation ending, their premises would not reopen.

They say they were then given “very limited” access to move out essential items under close escort by security staff employed by the council.

The business owners said they had had “several fruitless meetings” and that it was confirmed late on Tuesday (19 April) that the council “would not be offering to rehouse the businesses in equivalent accommodation”.

Alexa Galea, who leads workshops in Great Ormond Street hospital said the closure meant that she was “unable to run sessions at the hospital due to council staff restricting my access to my equipment and materials in the Carnegie workspace.

“The sessions had to be rescheduled, along with patients’ treatment and care plans.  The conduct of the council towards our businesses and the people who rely on us has been completely unacceptable.”

Another Carnegie business tenant, Tom Barton, said: “Lambeth has behaved shamefully. We have been locked out of our business premises without any notice or even consultation in direct contravention of our lease agreements.

“This has caused major disruption for our businesses, threatening our livelihoods.

“We see this as a warning for any small businesses thinking of operating in this borough – Lambeth is prepared to tear up any contracts with you without batting an eyelid.” 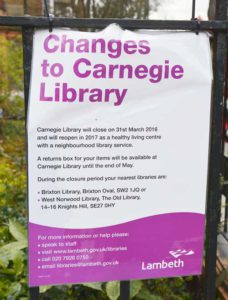 Their desk spaces were rented through London Arts Base (LAB). The businesses expressed gratitude to LAB for its persistence in continuing to negotiate with the council on their behalf.

Friends of Carnegie Library has registered a charity to run the Carnegie and developed a business plan showing how space in the Carnegie could be hired out to pay for a full library service.

By far the largest part of this income was to come from the Carnegie business hub that has now been closed.