Hundreds of local residents descended upon the much-loved Carnegie Library in Herne Hill on Saturday 6th February for National Libraries Day to show their resistance to the council’s plans to transfer the library to Greenwich Leisure Limited. Tanya du Plessis reports.

In addition to the regular activities such as Chess Club and the Friends’ monthly tea stall with cakes on sale, the library hosted story telling, creative writing workshops, origami and an introduction to interactive story-making app, Scribeasy. 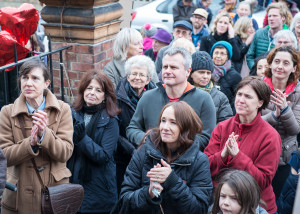 At 2pm local residents and Friends of the library gathered on the steps, overflowing into the road, to show their support for Carnegie and other libraries. The speakers included local author Adam Mars-Jones, writer Stella Duffy and Tim O’Dell the UNISON representative.

Tim O’Dell spoke passionately about the true value of libraries to the local community and his disappintment in the council’s plans to replace the library with an electronic book ordering system, similar to Amazon. 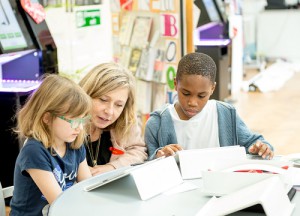 Entrepreneur Amanda Duncan (left) who developed a of Scribeasy, a digital interactive story writing app for smartphones, describes how the library played a vital role in her life. Amanda explained how, whilst working to combat her son’s lack of confidence with writing, she came to see the a challenge of creative writing through a child’s eyes. The library provided Amanda with support and the ideal environment for her product trial sessions during half term and school holidays, working with local children.

Read more about the council’s proposal to turn Lambeth’s libraries into gyms.

And read more about the resistance to their proposal.