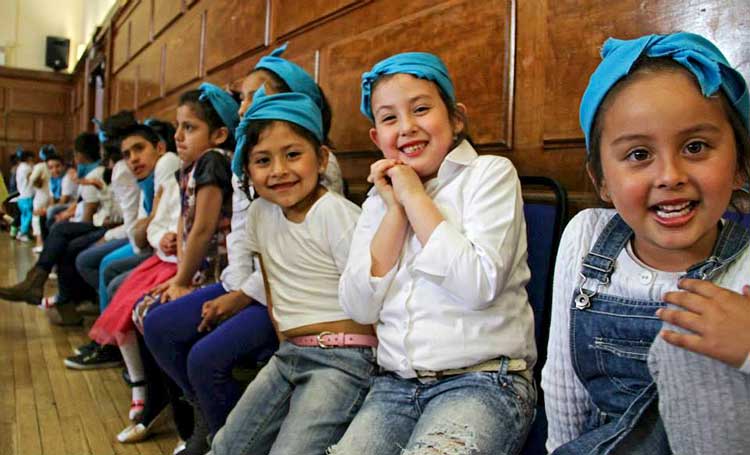 For 30 years a Brixton-based charity has been helping migrants from Latin America to settle into life in London, helping with language employment and welfare, and championing their rights.

From the noise coming from the classroom, you would never guess that many students have already worked a ten-hour day, or even longer. It’s 6.30 on a bitterly cold Tuesday evening and at the IRMO (Indoamerican Refugee and Migrant Organisation) building in Brixton’s Angell Town, the second English language class of term is already well under way.

Students in the elementary class are revising telling the time and dates, whilst the smaller intermediate group next door are practising introductions.

Segundo, from Ecuador, has just started the intermediate course, having completed the elementary course last year. “Before coming to IRMO I didn’t understand anything,” he says. “Now I understand better.”

English classes are just one of the many services offered by IRMO. It offers a range of welfare advice and employment support and campaigns for migrant rights.

For the mostly Latin American beneficiaries, English classes are crucial to overcoming the language barrier that is the biggest challenge in their day-to-day lives. Unlike many other courses, English classes at IRMO are free and flexible, so that they can be fitted around demanding work schedules.

“It’s very important for us,” Segundo stresses. “It’s very necessary.” He says the classes have helped him greatly in setting up a new life in England, giving him confidence in negotiating for work and accommodation. “I know new friends,” he says. “Now, it’s good.”

Segundo moved to England two years ago with his daughter. He had lived in Spain for 14 years, working as an artist, but when the economic crisis hit he came to London to seek better opportunities. At weekends he sells paintings at markets. During the week he works as a cleaner to support his family.

Segundo’s story is typical of many of the students, says IRMO director Lucia Vinzon.

Vinzon, originally from Argentina, came to the UK via Spain and has been involved with IRMO since her first week in London.

Like Segundo, the majority of IRMO’s beneficiaries work in the cleaning sector, despite the fact that over 70 per cent of them are educated beyond secondary level. Lack of English, experience or recognisable qualifications mean that many remain trapped in employment far below their abilities, which also leaves them with little time or funds to improve their situation.

IRMO helps by providing employment services and training as well as the English language classes. Last November saw the launch of Step Up, a project to enable people to attain work in their area of expertise, or in areas like construction or health.

For those who remain in cleaning, life can be tough. The sector is largely unregulated, with many workers employed on a casual or temporary basis having no entitlement to annual leave or sick pay. Exploitation is common, with 11 per cent being paid less than the minimum wage and many reporting discrimination.

Rafael, from Bolivia, was initially employed as a restaurant’s chef assistant. He cooked well and found the job easy, but due to his lack of English struggled when service was busy. He is now the kitchen cleaner and earns just £6.20 an hour. With a family to support, this means working long hours, up to 15 a day, so there is “no time for family, only my job. No time to study English.”

Despite the problems he faces, Rafael says being in London is worth it because of the opportunities that it will provide his daughter. He boasts, with barely containable pride, how after only two years, his five-year-old can speak, read and write in English, as well as do maths. “This country has good opportunities for people, for studying,” he says.

IRMO offers an advice service for those experiencing problems at work in partnership with Unite the Union. Last year, the charity helped to resolve over 150 specific cases, such as the non-payment of wages, and helped raise awareness of workplace rights.

Last year, IRMO celebrated its 30th anniversary after being founded in 1985 by Chilean refugees escaping a military coup.

The occasion was celebrated by a huge community fiesta in December. There was a lot to celebrate – in 2015, IRMO was awarded the Community Organisation of the Year Award at a ceremony with Jeremy Corbyn and Bianca Jagger.

During 2015, more than 4,400 people benefited from IRMO projects and services. With the Latin American community one of the fastest-growing in London, demand for IRMO’s services – including IT classes, a homework club, a family project, women’s project, and more – are likely to increase.

Last year, it worked with the Coalition of Latin American Organisations in the UK on a successful campaign to have Latin Americans recognised officially as an ethnic group in the boroughs of Lambeth, Southwark, Islington and Hackney. The group will now be included on monitoring forms, helping to ensure that the needs of the community become visible to policy-makers.

This year IRMO also aims to continue its voter registration campaign, helping people to understand the voting process and empower them to make their views heard.

Yet in our current political climate, with media rhetoric around migrants, it can be hard to feel empowered. Some media “describe migrants as animals … as not human,” Vinzon comments. “They say that they take advantage of the system.”

“It’s very hard to hear that,” she admits. “These are people we see here every day, people who are hardworking and contributing to society, that want to integrate.”

To find out more about IRMO here see its website: here.