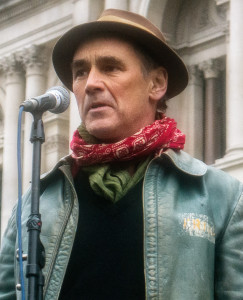 Mark Rylance has lent his support to the campaign to save Lambeth’s libraries from the council’s controversial plans to close some and allow others to be run as gyms.

The star of Wolf Hall and Bridge of Spies, who has been a resident of Brixton, Camberwell and Herne Hill since 1986, said libraries are the “fabric of our communities”.

Rylance has given his support to the Green Party, who have called on Lambeth to adopt a proposal put forward by Lambeth’s head of libraries Susanna Barnes to form a staff and community mutual organisation to run all Lambeth libraries.

Rylance said: “I am sure it is true that libraries need to evolve, and I understand our libraries are evolving very successfully.”

“To sell them off to private interests is a betrayal  of the wishes of someone like Mr. Carnegie who educated himself out of  extreme poverty as an immigrant in America. How did he do that? At a Library,” he said.

Jane Edbrooke, council cabinet member responsible for libraries, has said that government cuts have forced Lambeth to reduce £4 million from its cultural service budget but she will ensure the re-organised library service continues to meet the needs of the community.

There will be no change to statutory town centre library services in Brixton, Streatham, Clapham and West Norwood.